On the morning of August 12, 1944, the German troops entered the mountain village of Sant’Anna di Stazzema, accompanied by some fascists of the 36th Brigata Nera Benito Mussolini based in Lucca, who were dressed in German uniforms.

The soldiers immediately proceeded to round up villagers and refugees, locking up hundreds of them in several barns and stables, before systematically executing them. The killings were done mostly by shooting groups of people with machine guns or by herding them into basements and other enclosed spaces and tossing in hand grenades.

At the 16th-century local church, the priest Fiore Menguzzo (awarded the Medal for Civil Valor posthumously in 1999) was shot at point-blank range, after which machine guns were then turned on some 100 people gathered there. In all, the victims included at least 107 children (the youngest of whom, Anna Pardini, was only 20 days old), as well as eight pregnant women (one of whom, Evelina Berretti, had her stomach cut with a bayonet and her baby pulled out and killed separately).

After other people were killed through the village, their corpses were set on fire (at the church, the soldiers used its pews for a bonfire to dispose of the bodies). The livestock were also exterminated and the whole village was burnted down.

All of this was accomplished in three hours. The SS men then sat down outside the burning Sant’Anna and ate lunch.

These crimes have been defined as voluntary and organized acts of terrorism by the Military Tribunal of La Spezia and the highest Italian court of appeal.

However, extradition requests from Italy were rejected by Germany. In 2012, German prosecutors shelved their investigation of 17 unnamed former SS soldiers (eight of whom were still alive) who were part of the unit involved in the massacre because of a lack of evidence.

The statement said: “Belonging to a Waffen-SS unit that was deployed to Sant’Anna di Stazzema cannot replace the need to prove individual guilt. Rather, for every defendant it must be proven that he took part in the massacre, and in which form.”

The mayor of the village, Michele Silicani (a survivor who was 10 when the raid occurred), called the verdict “a scandal” and said he would urge Italy’s justice minister to lobby Germany to reopen the case. German deputy foreign minister Michael Georg Link commented that “while respecting the independence of the German justice system,” it was not possible “to ignore that such a decision causes deep dismay and renewed suffering to Italians, not just survivors and relatives of the victims.”

In its heyday, Bagni di Lucca, with its cool climate and great variety of hot springs had been a very fashionable European holiday resort and spa town. Beautiful elegant hotels had been built all around the spas. Villas, owned by heads of state and various ambassadors and dignitaries were crammed with antique furniture, musical instruments and rare books.

There were cultural centres, casinos, Anglican churches and cemeteries, restaurants and theatres. Famous poets, singers, playwrights, writers, actors and actresses used to flock there in the summer months. Presumably, many wars and marriages were arranged and important state decisions taken inside those thick stone walls, so far from indiscreet ears. 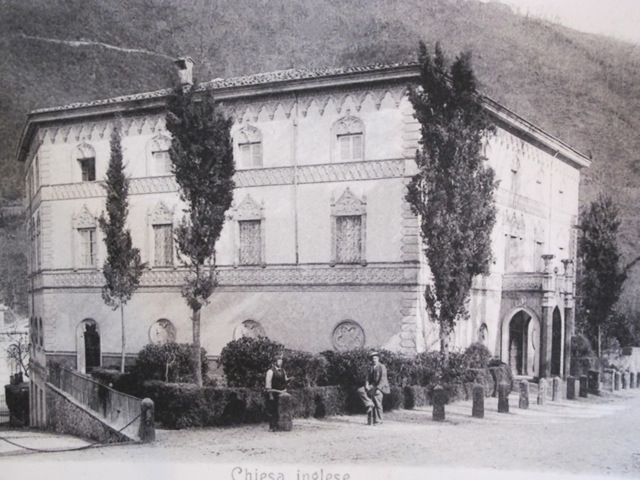 With the advent of fascism in Italy, renewed nationalism and World War Two, the “guests” of Bagni di Lucca suddenly became completely undesirable, and were later either deported or forced to flee.

Their properties were confiscated which meant that the local fascist bosses, for the most part rude uneducated thugs, suddenly had access to and became owners of luxurious properties full of rare works of art. There are tales of grand pianos being chopped up for firewood, rare books being transported to the local paper mills  and being sold by the kilo, manuscripts being burnt on bonfires, and paintings being thrown out on to the grass where rain and sun eventually got the better of them.

Some of the villas miraculously passed into the hands of new owners. Deeds were drawn up, and illiterate mountain folk suddenly felt like princes and princesses. Some were used for more sinister purposes, housing torture and detention centres for political opponents, intellectuals and partisans or worse, boarding houses for Jewish and gypsy children before they left for their final destinations.

The grand rooms and theatres, which had housed great composers and musicians, were turned almost overnight into brothels or barracks for Mussolini’s troops.

At last! Many dignitaries thought that law and order has been restored. We are in charge again and those foreigners got what they deserved!

Of course, things didn’t quite turn out as expected. Italy did not get its empire, but instead a humiliating loss in which not only did it once again have to bow down to the overwhelming power of the Anglo-American armies, but it also had to sign really unfair future agreements, thus becoming a near slave to the foreign oil barons, military-industrial complexes, big Pharma religion and cars and motorways.

After the war there was no money for the upkeep and maintenance of the once magnificent hotels and spa complexes and anyway the whole of Italy was busy doing other things. People were emigrating in hordes, abandoning villages, hilltops and mountains for large industrial cities in the north, going to work in the booming car industries or in foreign cities.

The people were all working like busy bees for their new masters, building motorways and high rise blocks of flats, spraying clean fields, vineyards and fruit farms with toxic pesticides, getting rich and watching TV.

Bagni di Lucca became a ghost town. Gone were the shepherds and their flocks, the orderly rows of vegetables, the pigs, cows, geese and ducks, the large families and old traditions. Winters passed and vegetation covered the villages and country lanes. Vines grew over and smothered the beautiful old buildings until there was nothing left, except memories in books which no one ever opened.

Small factories sprang up in Bagni di Lucca: paper mills spewing out clouds of black smoke and colouring the rivers pink and blue, and the souvenir industry which exported plastic figurines to many parts of the world. The owners of these businesses became very wealthy and the only people left who had not emigrated elsewhere worked entirely for the “benefactors” who could therefore pay as little or as much as they liked, as people had no other alternative.

In the 1960s and 70s, people had started to talk about the possibility of starting up the tourist business once more but this was generally discouraged by the benefactors as it would have meant distraction for their workers. So by the time the international association arrived in town they were entering a world which might as well have been in a time warp.

Actually, as we later found out, they, being mostly highly intelligent and educated people, had vision and they had realised back then that it was time to flee the big cities before globalisation, the de-industrialisation of Italy, mass unemployment, climate change, wars for oil and water and social unrest hit us all. They were right about that, they just chose the wrong place.

Are you a fan of camellias? I am.

Discover the Gardens in Italy where you can admire them!

Today, beautiful specimens of Camellias can be admired in many gardens. Between Italy and the Canton of Ticino, from the first weeks of March and throughout April, it is possible to get lost among the colors and the scents of the Camellias in bloom. In Switzerland, in Locarno, a few miles from Lugano, is the Parco delle Camelie, inaugurated in 2005, to fascinate you with its 850 varieties of camellias cataloged, to which are added 70 still unidentified camellias , planted at the southern end of public paths, and 130 double camellias, which form a dividing hedge and are used primarily to provide cut flowers for the annual show held in spring.
In Tuscany the wonderful Viale delle Camelie of the Giardino della Villa Reale di Malia (Capannori, LU) is waiting to give you an unforgettable walk, while in Florence in spring the flowering of the camellia grove of the Giardino Bardini , placed behind the wonderful belvedere on the city. 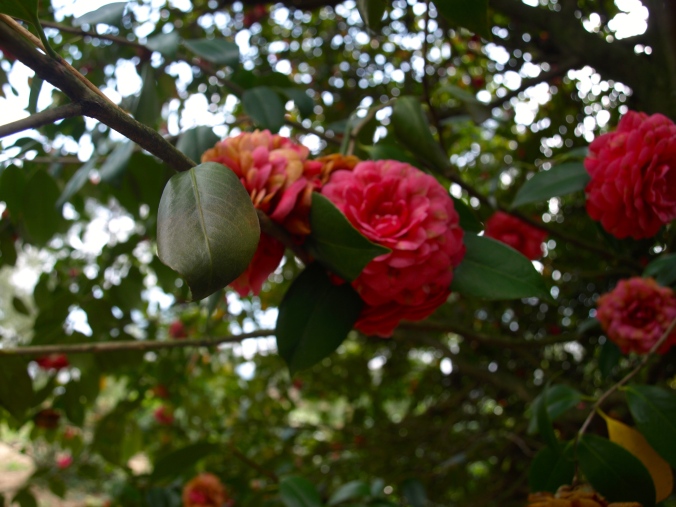 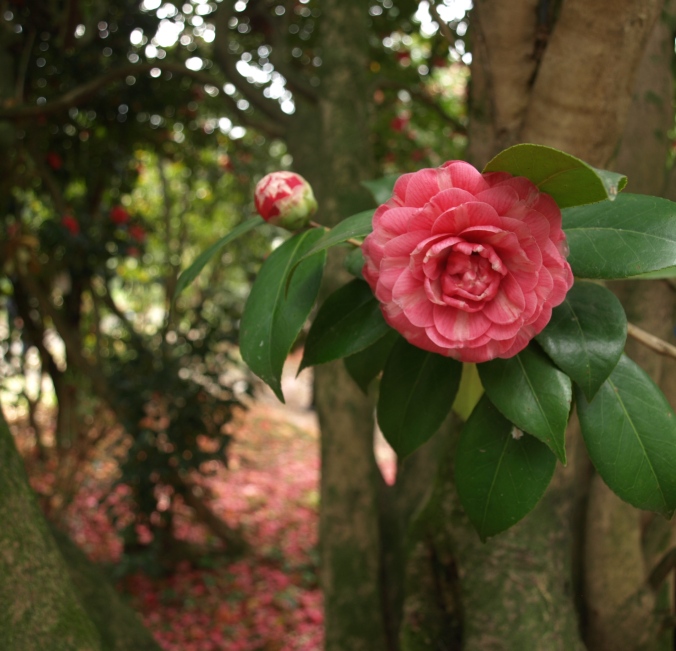 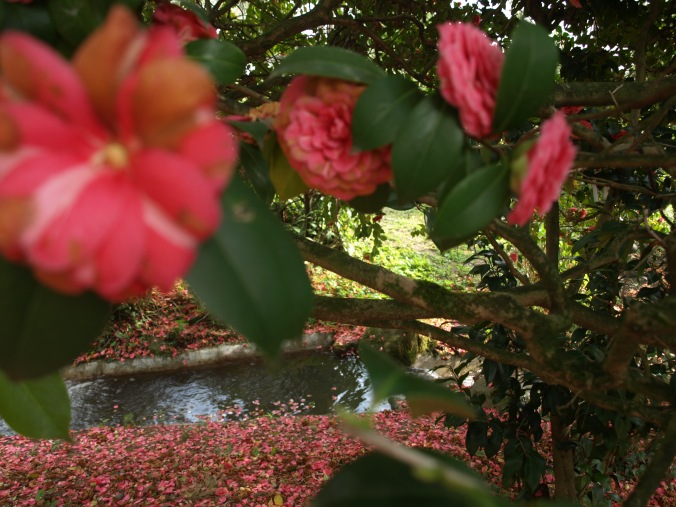 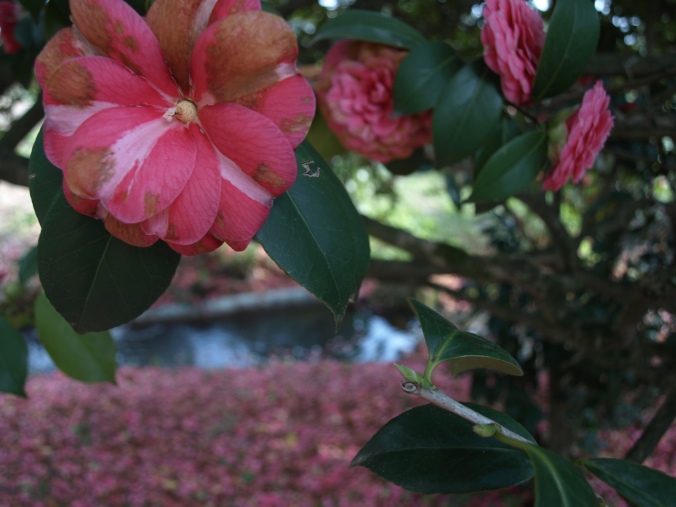 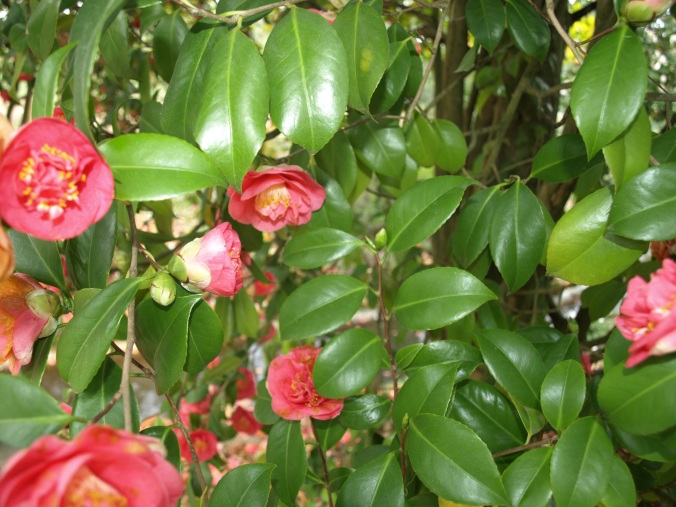 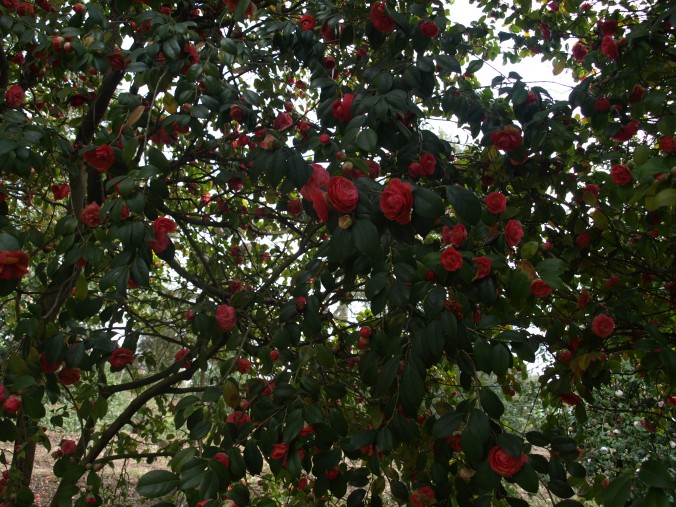 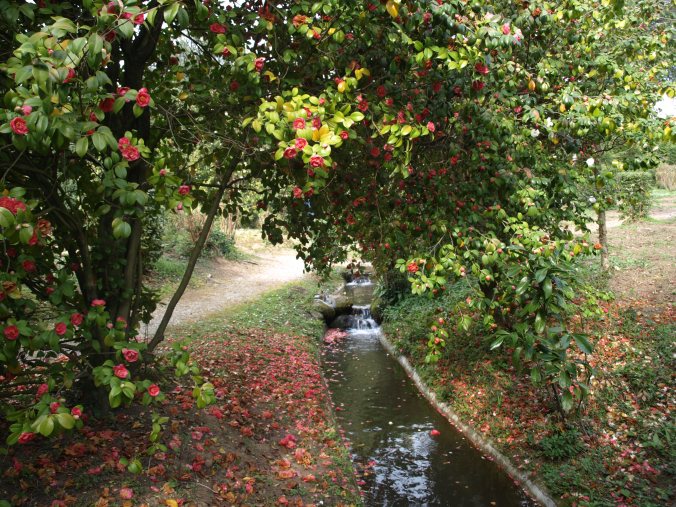 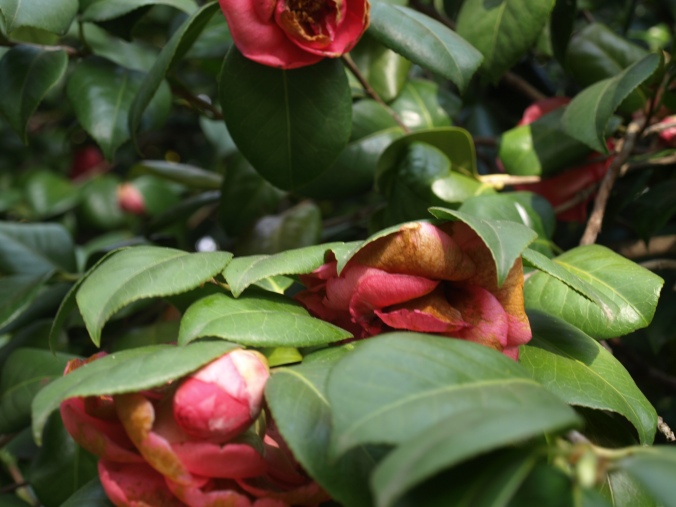 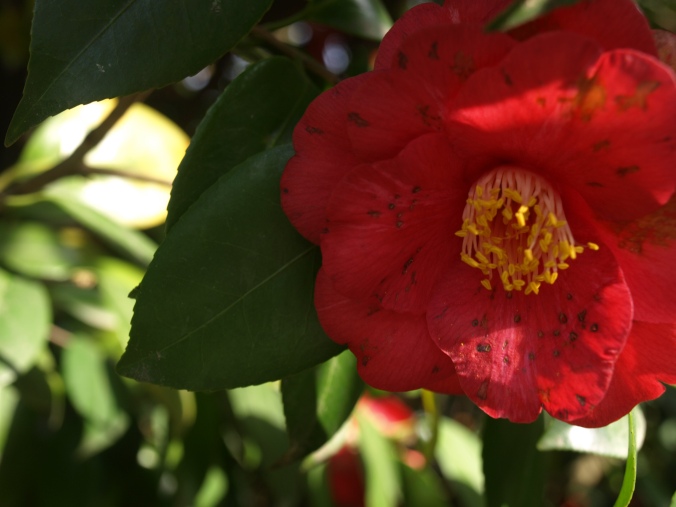 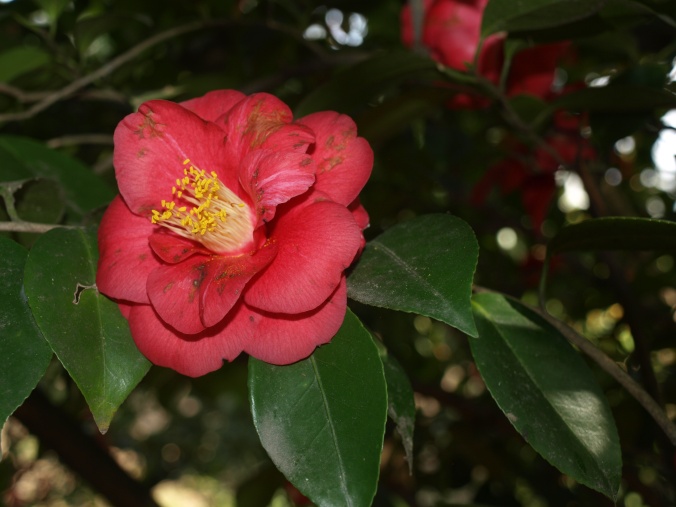 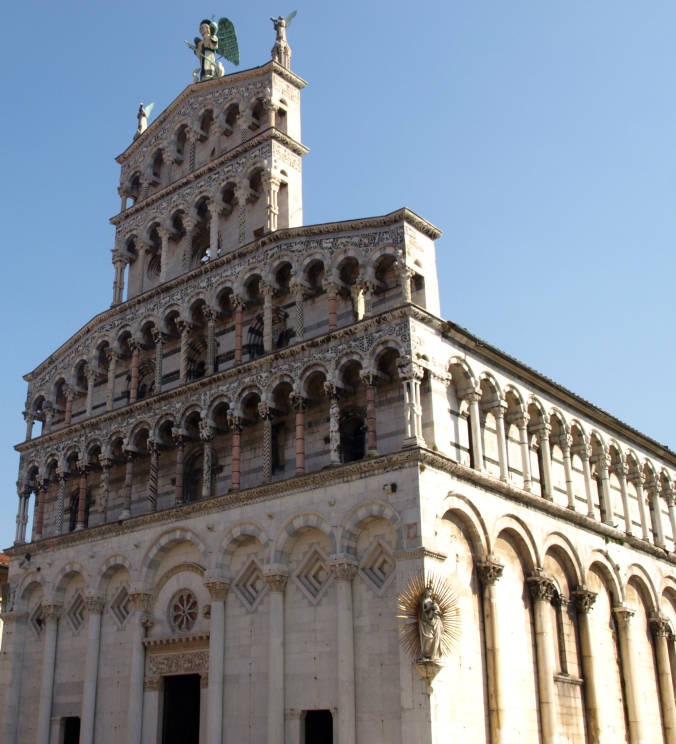 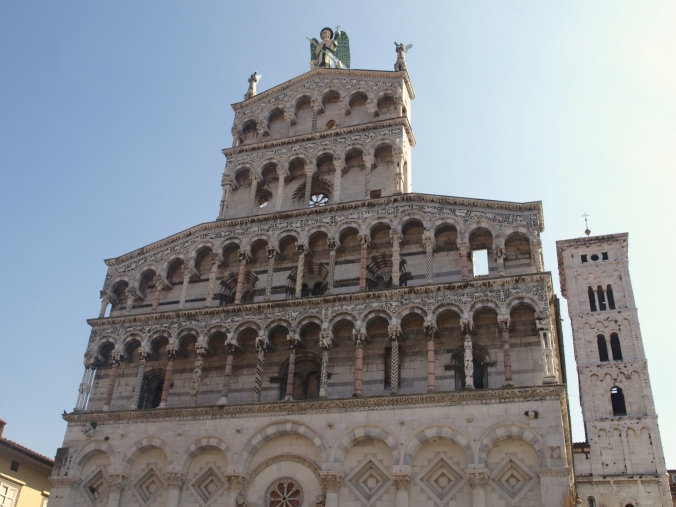 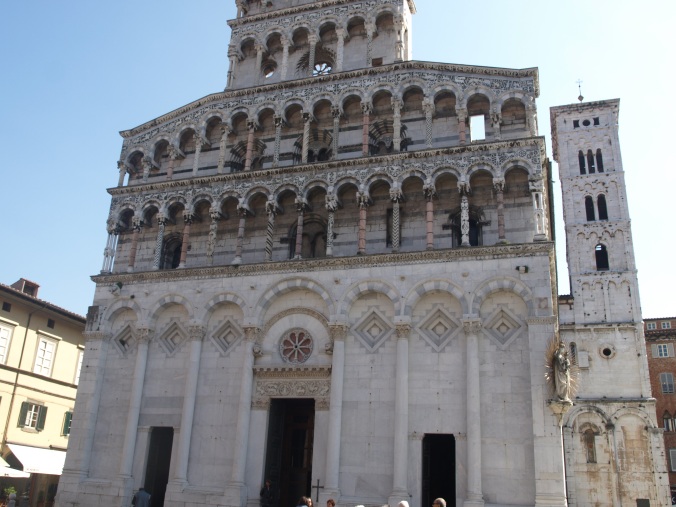 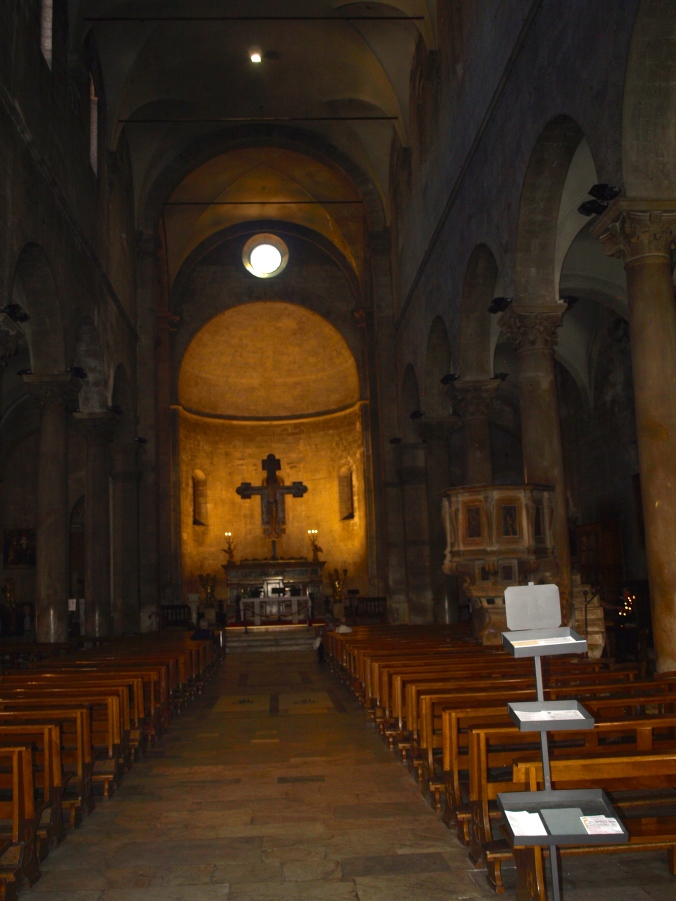 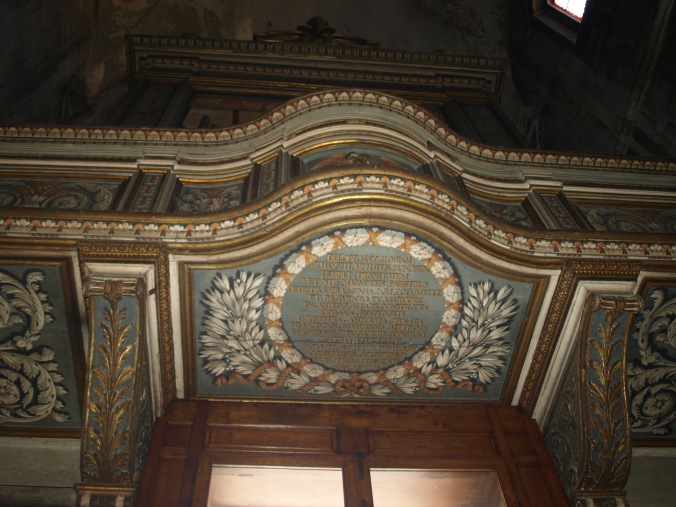 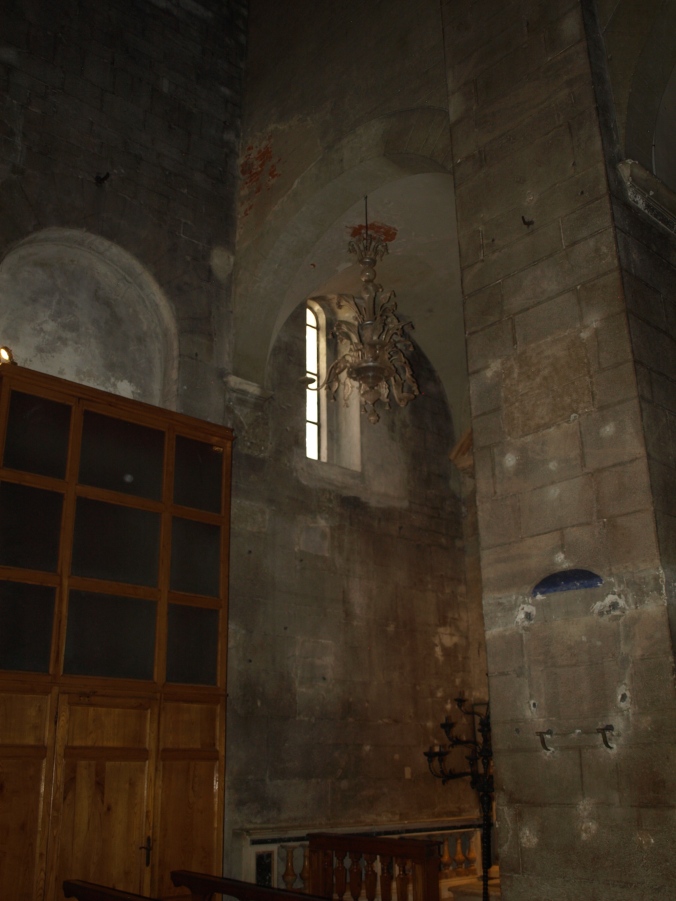 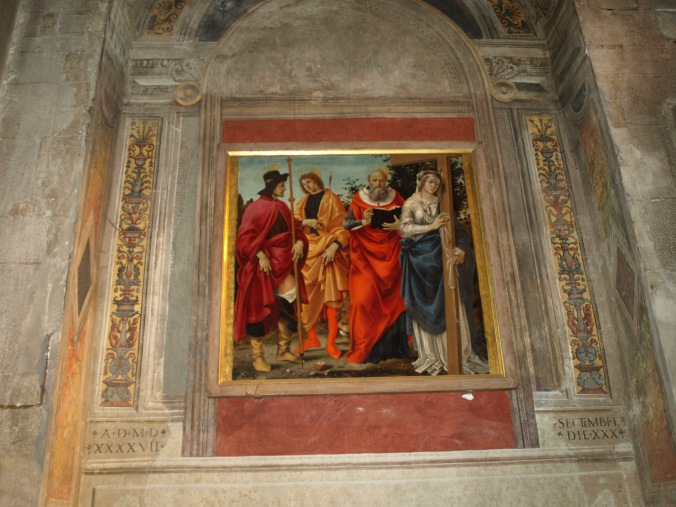 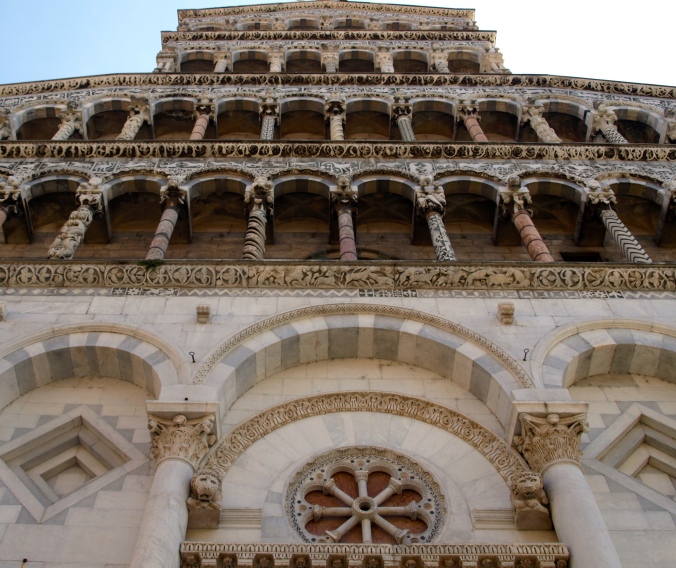 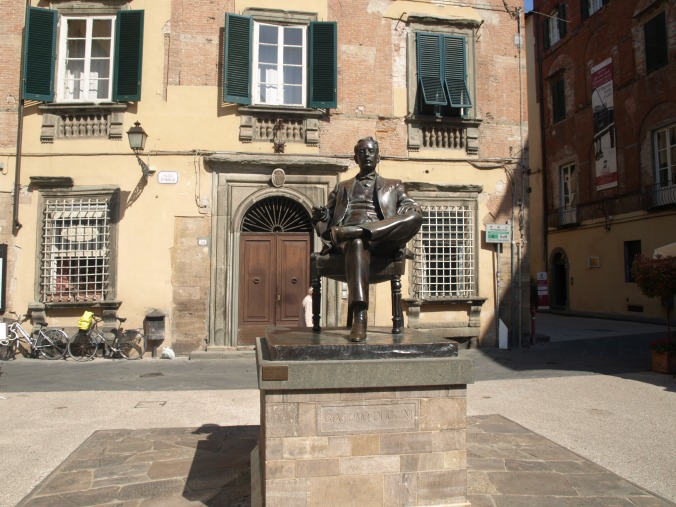 Puccini’s statue at his house.

My favorite photog above. 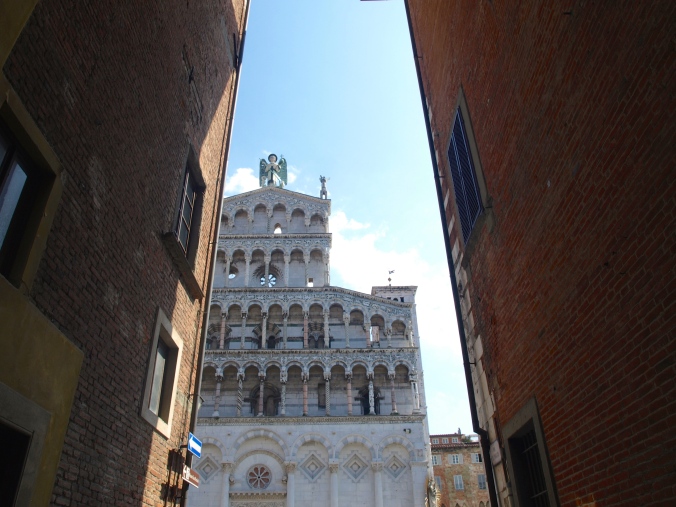 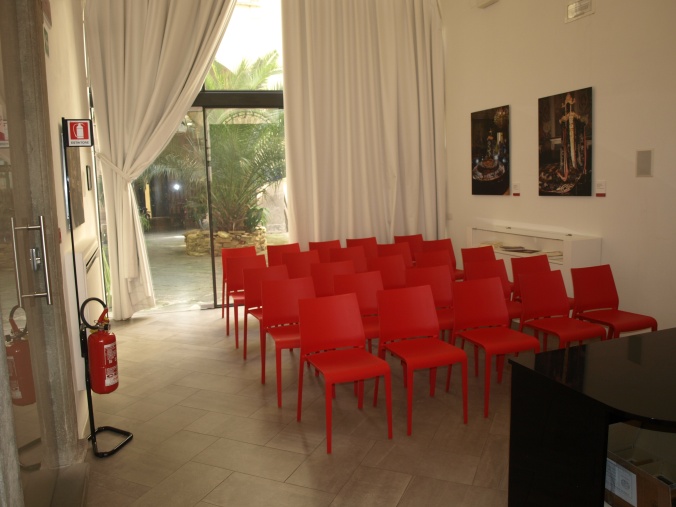 I’m daydreaming about a lovely Lucchese restaurant where the cuisine/wine list is fine and of course the pasta is freshly made.

Let me take you on a little tour of this fine establishment:

My mouth waters just looking at these pictures!

Il campanile del duomo out the window over my right shoulder.

Il campanile della baptisteria out the window straight ahead of me.

All I have to do from this bedroom is turn my head slightly to take in two medieval structures.  It’s kind of amazing!

Cyclamen blooming their hearts out on my terrazzo. Love.

White blooming jasmine grows on the trellis on the far wall of my terrazzo. Would that they were blooming now.  Sigh.  I can almost smell the sweet fragrance.

The view of the campanile of il duomo di Lucca from my 2nd bedroom.  Boggles my mind daily!