One by one, the landmarks of Florence have been re-opening.  With new rules and regulations, one can pay a visit to these famous sites.  I recently enjoyed seeing the Palazzo Vecchio for the first time since the lock down. Very enjoyable to see old friends.

The Salone dei Cinquecento (‘Hall of the Five Hundred’) is the most imposing chamber in the Palazzo Vecchio, with a length of 170 ft and width of 75 ft. It was built in 1494 by Simone del Pollaiolo, on commission of Savonarola who, replacing the Medici after their exile as the spiritual leader of the Republic, wanted it as a seat of the Grand Council (Consiglio Maggiore) consisting of 500 members.

Later the hall was enlarged by Giorgio Vasari so that Grand Duke Cosimo I could hold his court in this chamber. During this transformation, famous (but unfinished) works were lost, including the Battle of Cascina by Michelangelo, and the Battle of Anghiari by Leonardo da Vinci. Leonardo was commissioned in 1503 to paint one long wall with a battle scene celebrating a famous Florentine victory. He was always trying new methods and materials and decided to mix wax into his pigments. Da Vinci had finished painting part of the wall, but it was not drying fast enough, so he brought in braziers stoked with hot coals to try to hurry the process. As others watched in horror, the wax in the fresco melted under the intense heat and the colors ran down the walls to puddle on the floor. A legend exists that Giorgio Vasari, wanting to preserve Da Vinci’s work, had a false wall built over the top of The Battle of Anghiari before painting his fresco. Attempts made to find Da Vinci’s original work behind the Vasari fresco have so far been inconclusive.

Michelangelo never proceeded beyond the preparatory drawings for the fresco he was commissioned to paint on the opposite wall. Pope Julius II called him to Rome to paint the Sistine Chapel, and the master’s sketches were destroyed by eager young artists who came to study them and took away scraps. The surviving decorations in this hall were made between 1555 and 1572 by Giorgio Vasari and his helpers, among them Livio Agresti from Forlì. They mark the culmination of mannerism and make this hall the showpiece of the palace.

Here are some miscellaneous objets that caught my eye on this day.  All of them are in the Salone dei Cinquecento, unless otherwise noted: 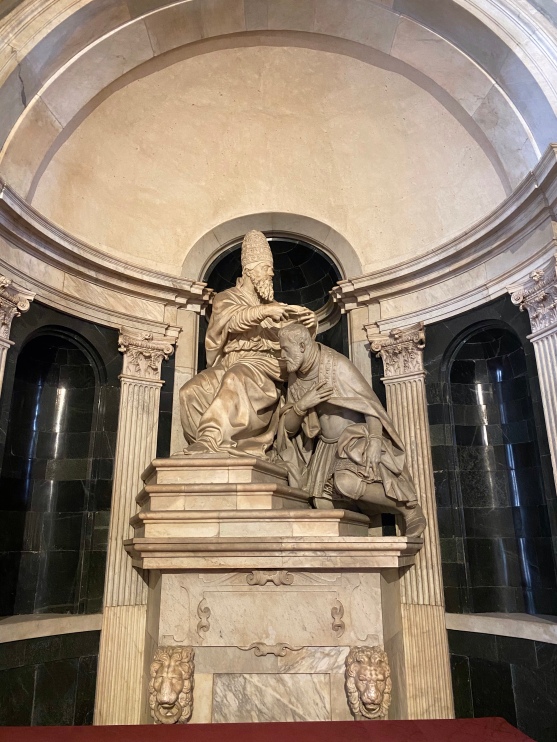 I see the coat of arts of the Medici family all over Florence, but this one is beyond extravagant: 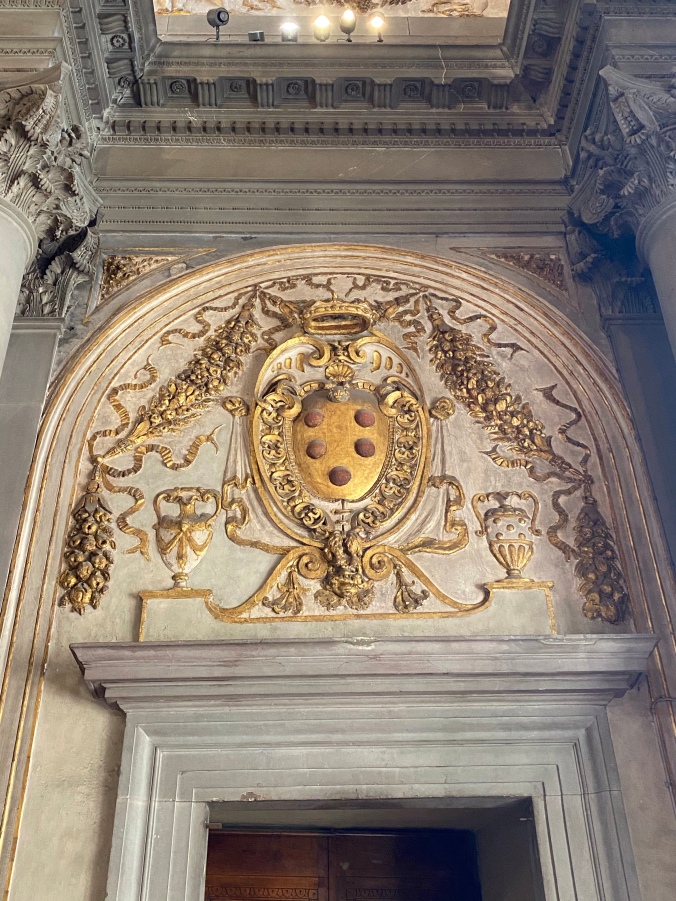 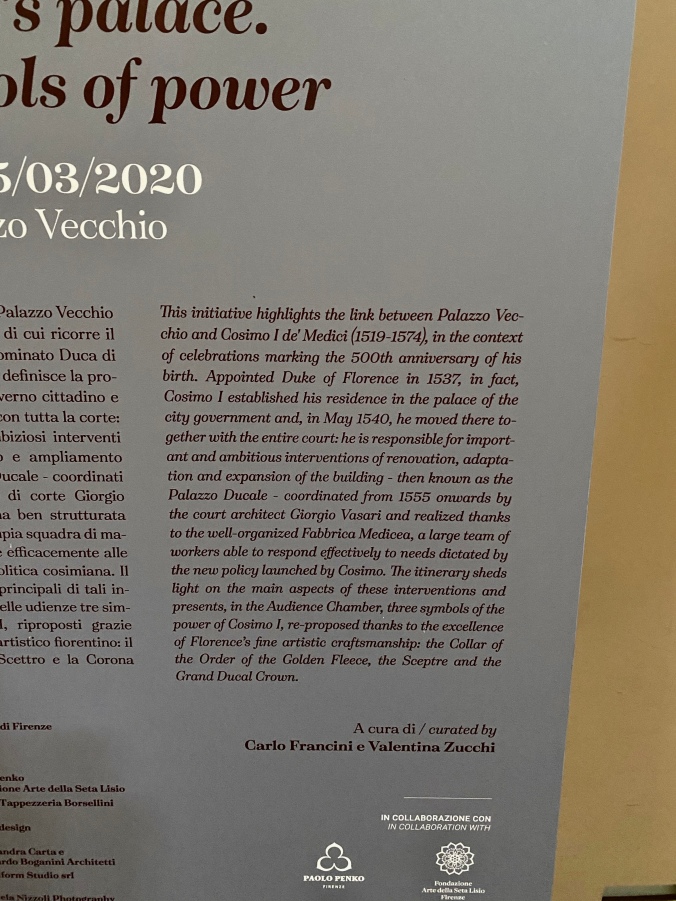 A sculpture by Michelangelo takes a place of honor in this large hall: 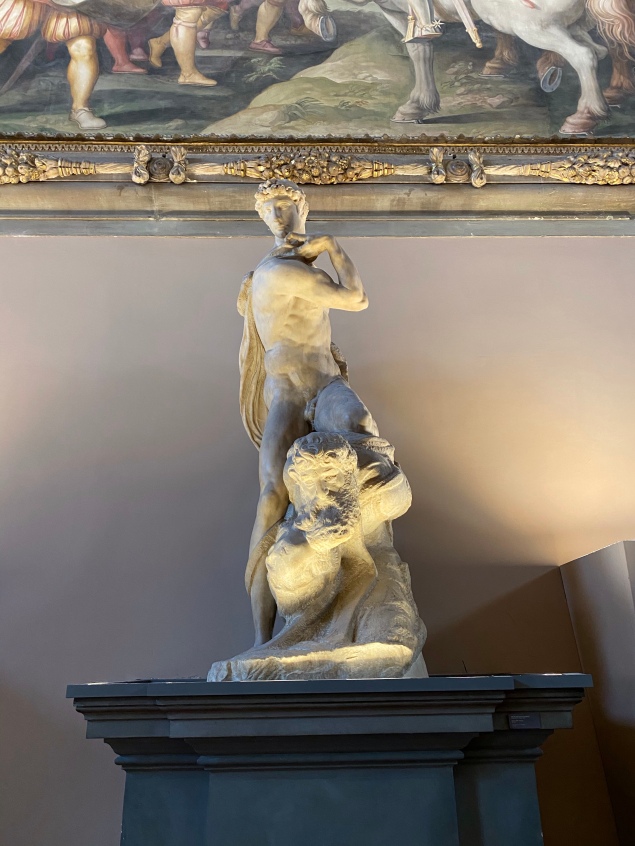 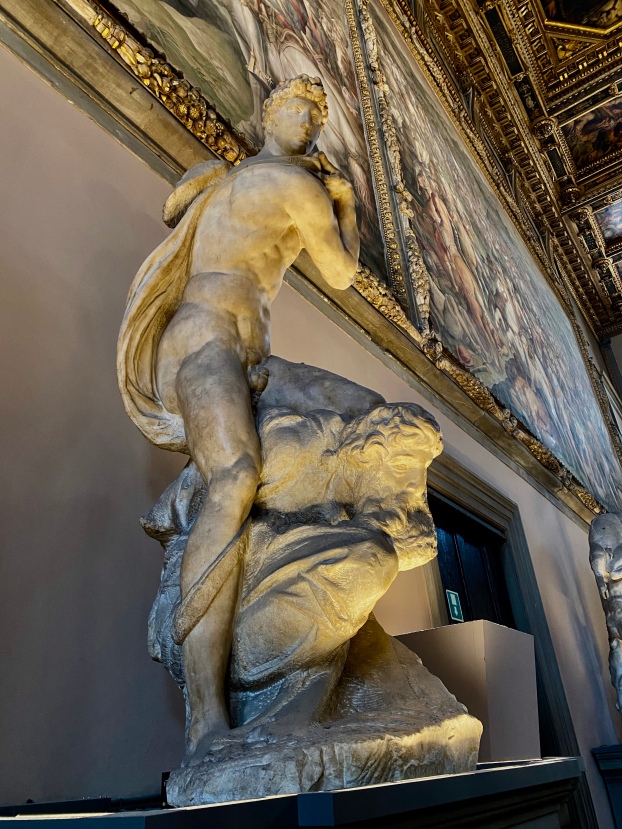 OK, we have departed the Salone.  All of the following pictures are from subsequent rooms.

One of the things I like about many Italian stairways is the use of these heavy cords.  I like the way they look and the way they draw on Italian textile traditions.

The St. John’s Day Fireworks have been an ongoing Florentine tradition for centuries.  It was fun to see this painting depict it from the 16th century. 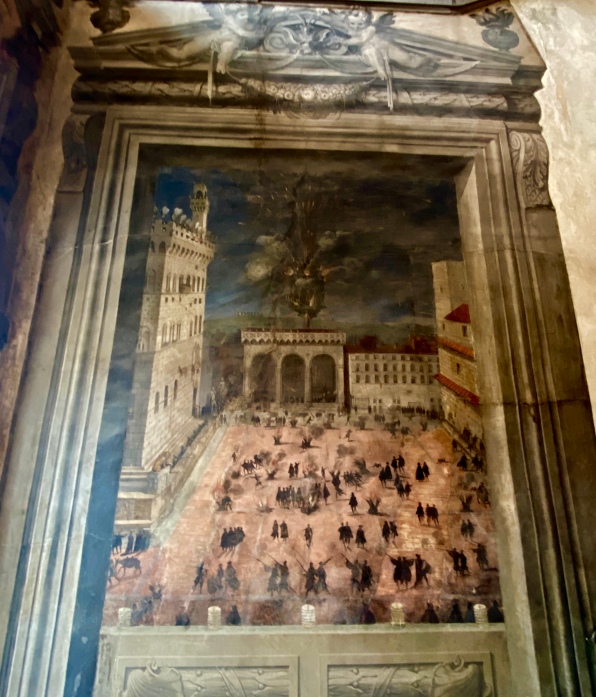 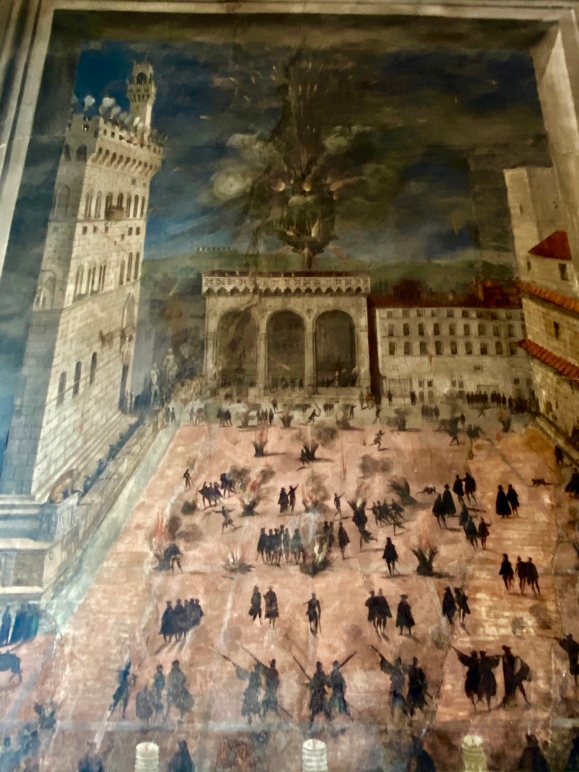 Here’s another fanciful coat of arts for the Medici family, this one in fresco: 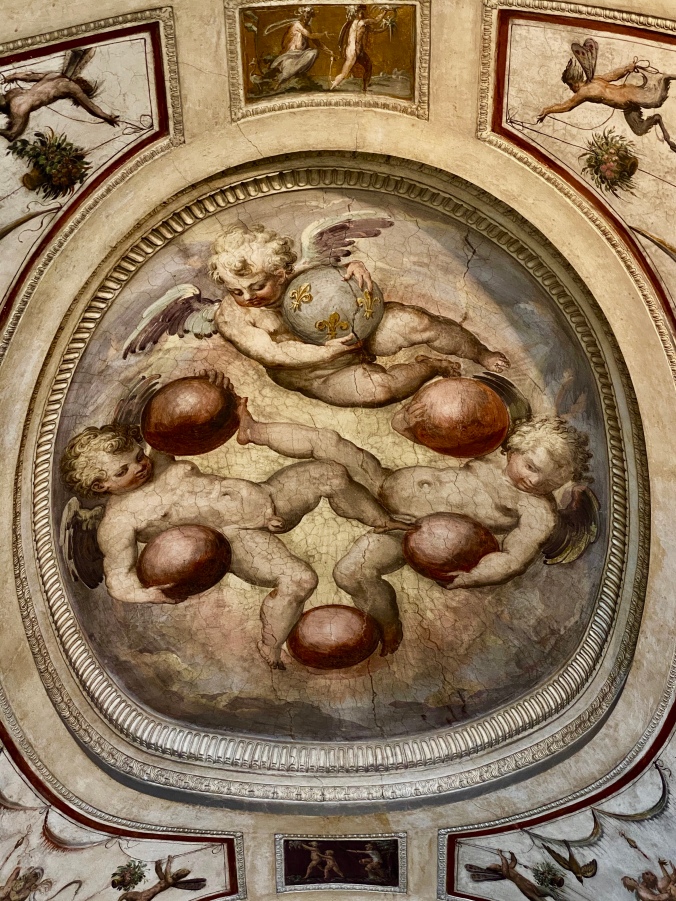 And putti carry the crown that will sit on Medici heads: 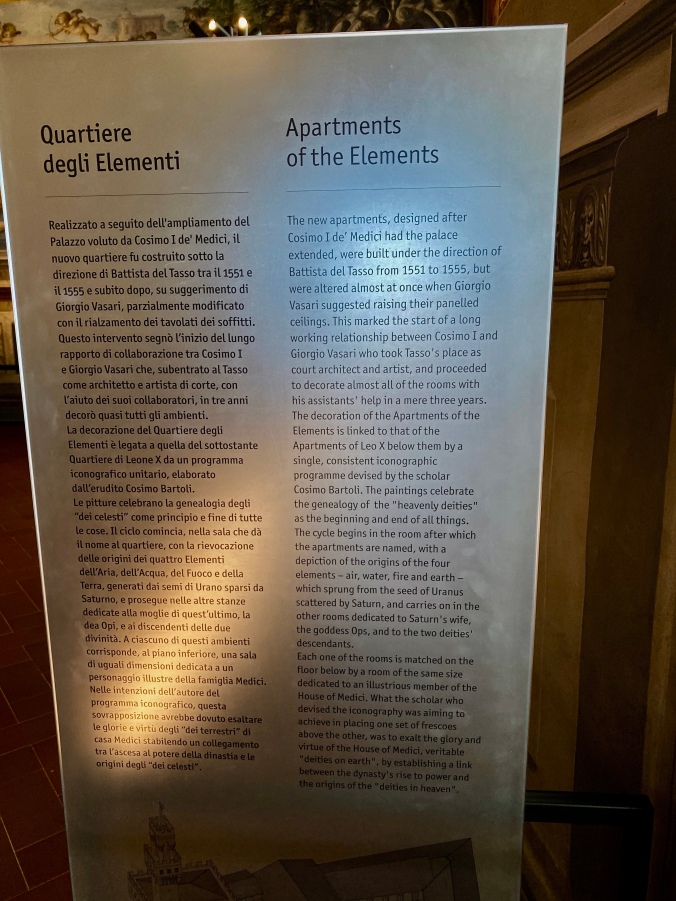 Here is the original Verrocchio statue.  A copy sits in its original place in an open courtyard on the ground floor. 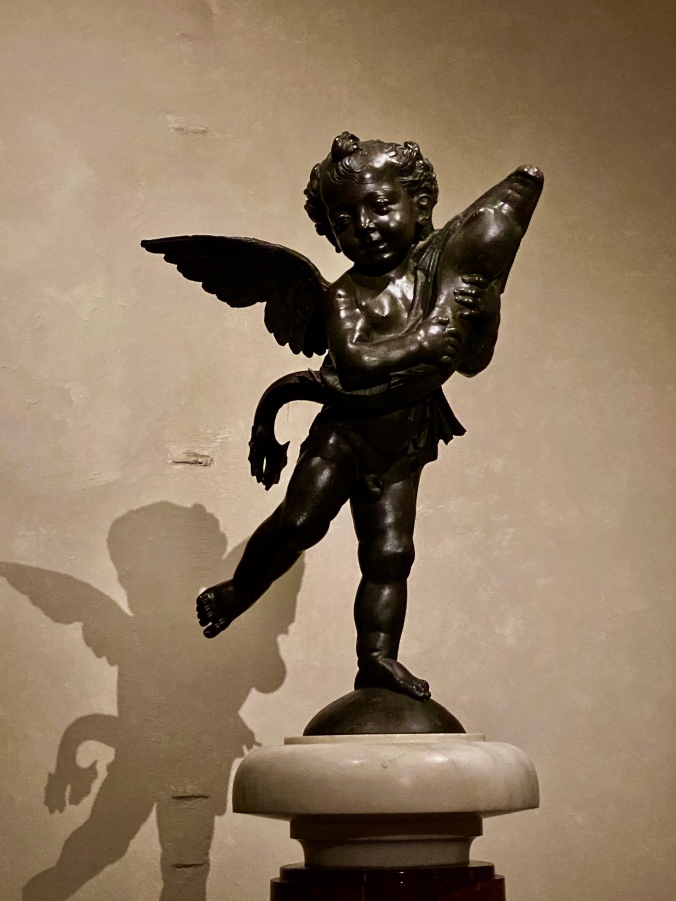 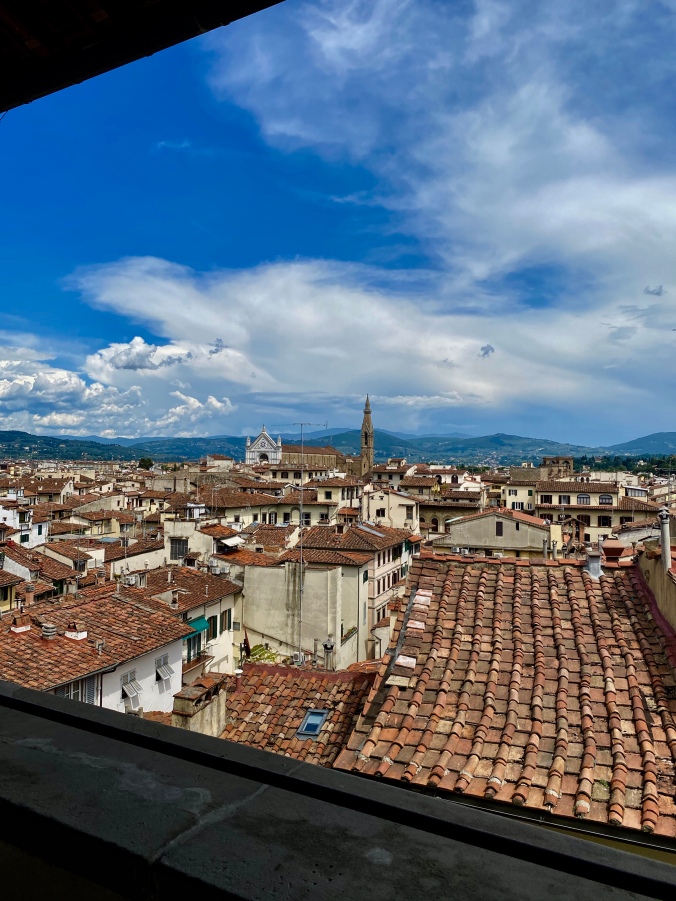 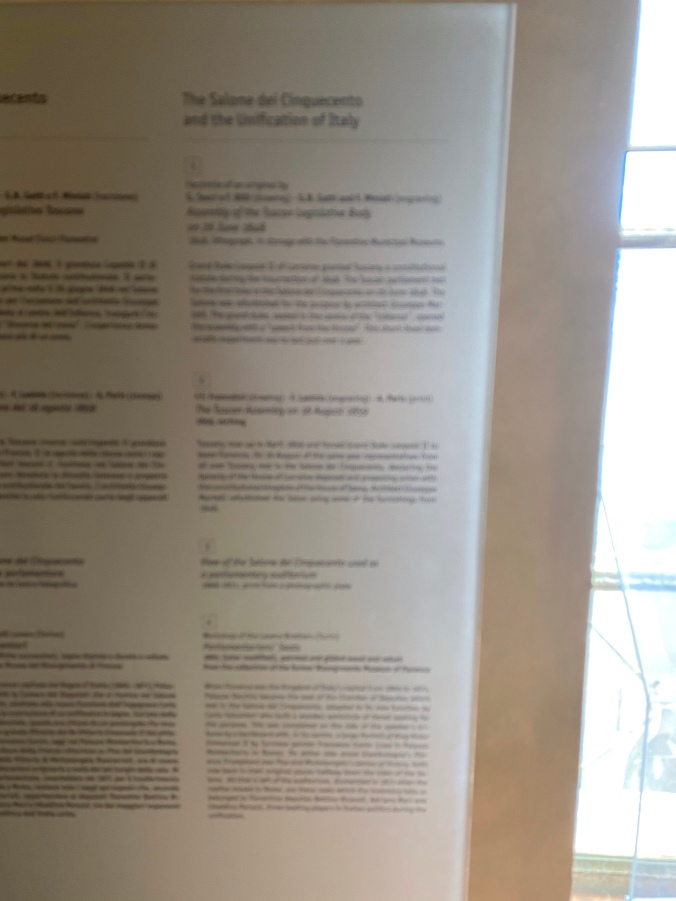 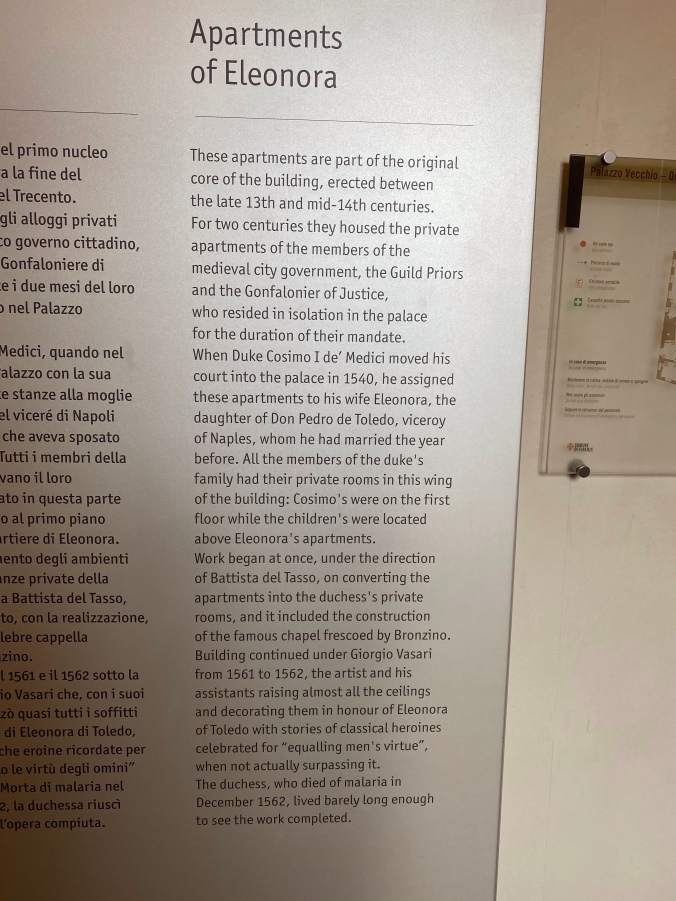 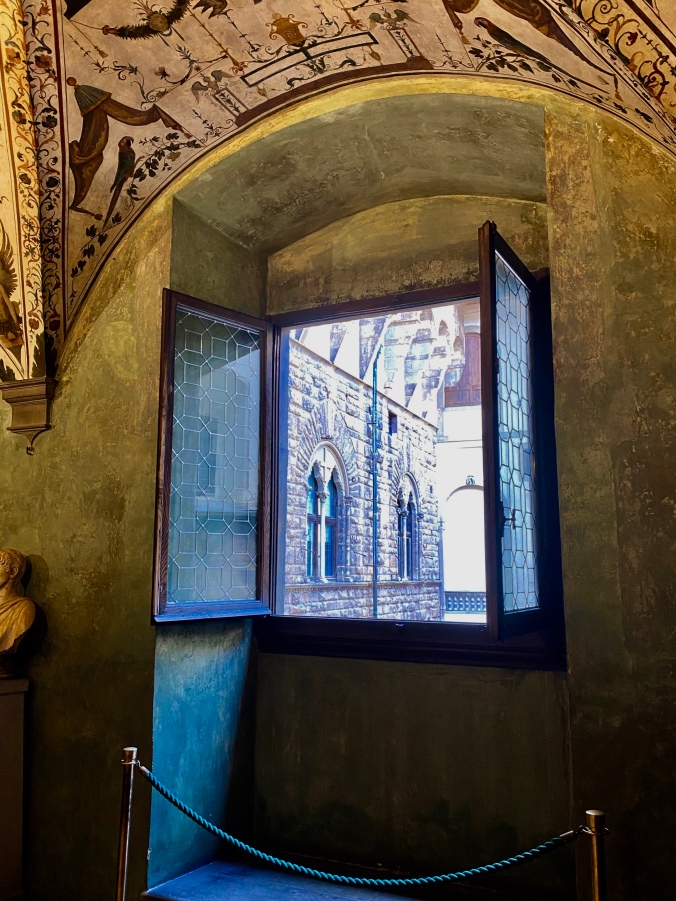 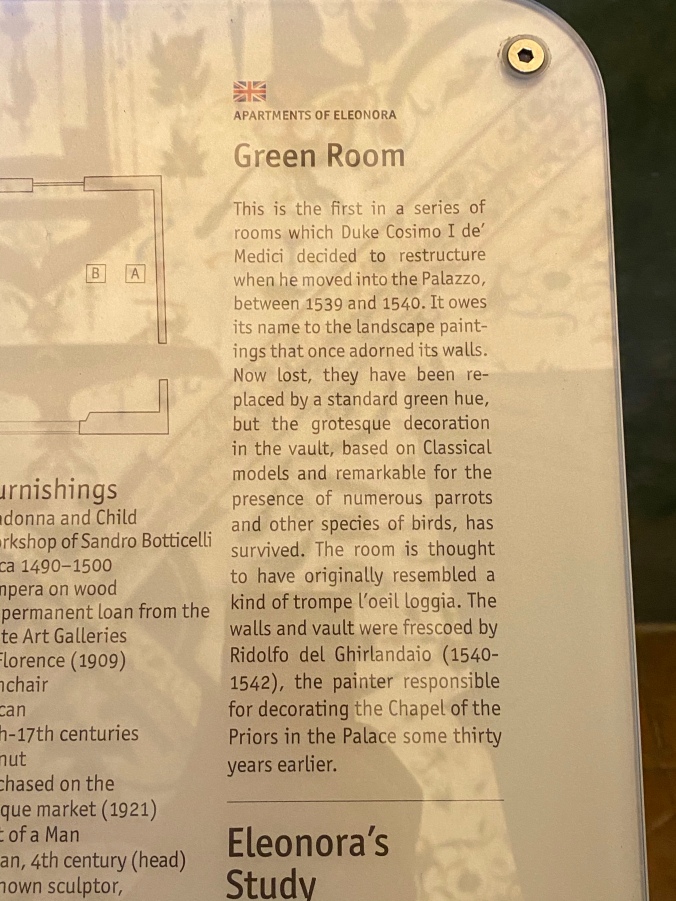 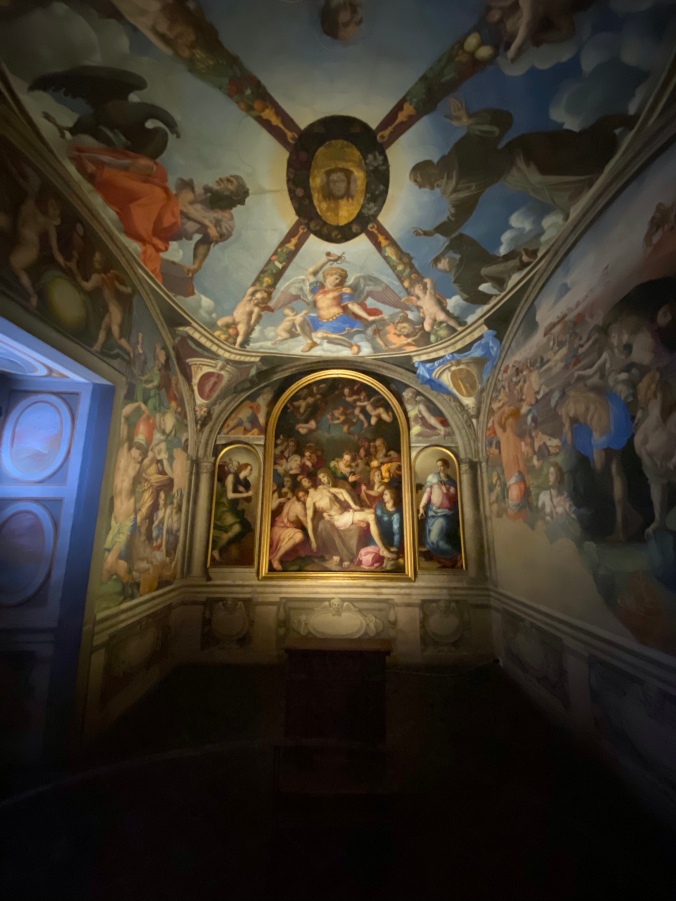 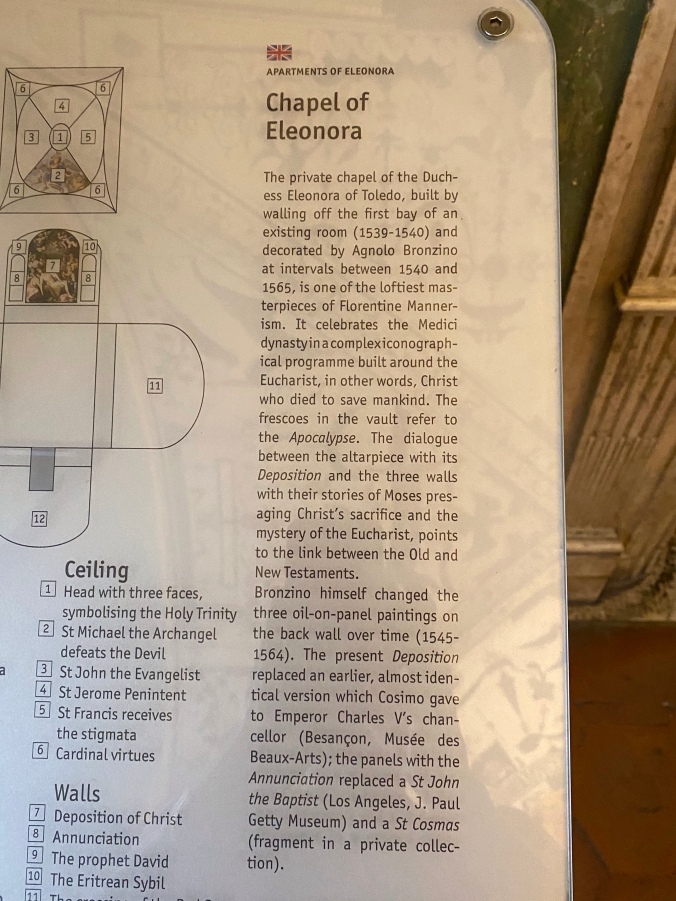 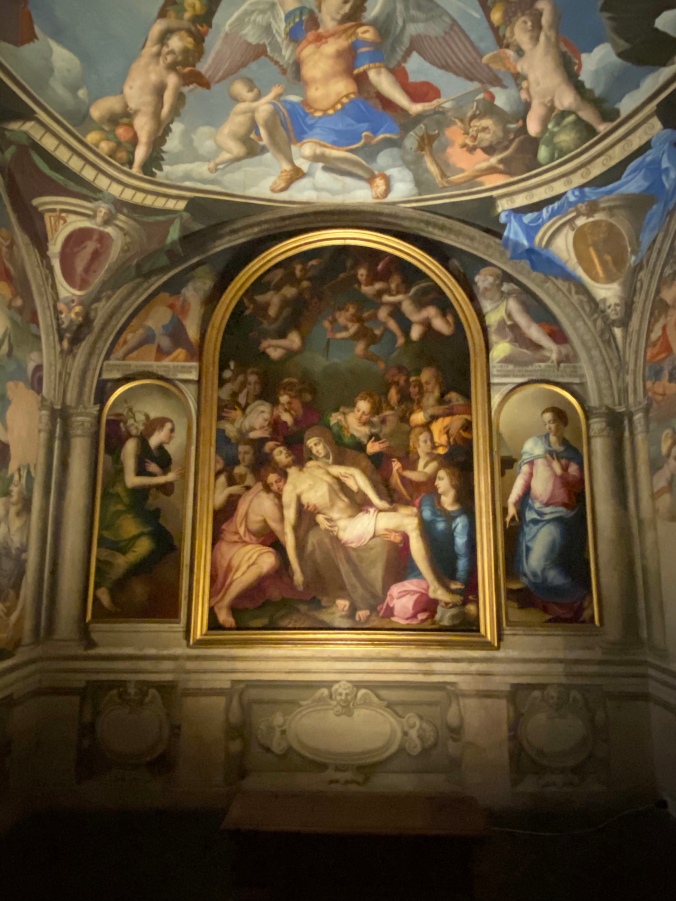 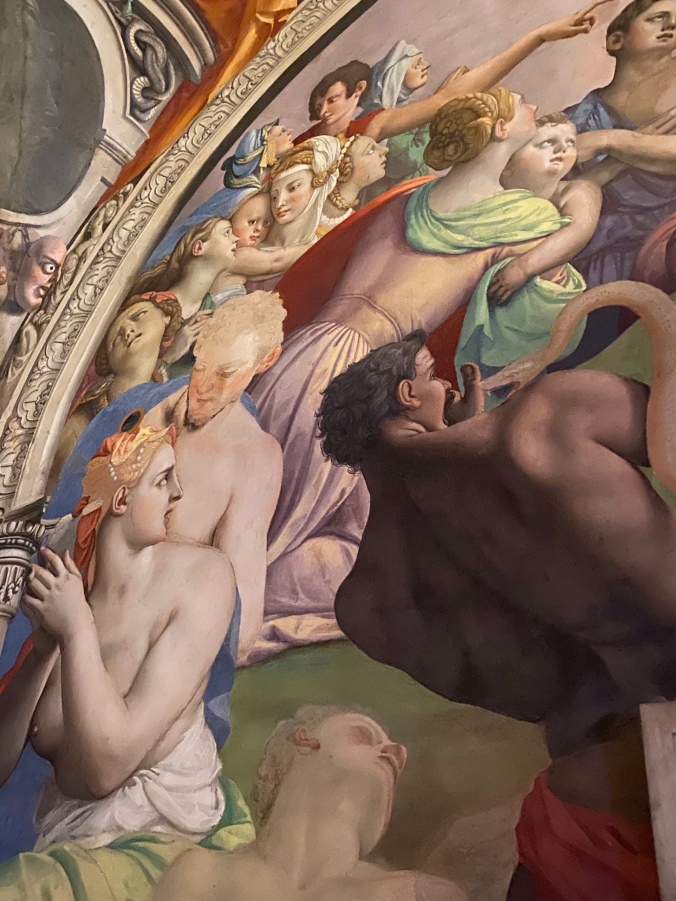 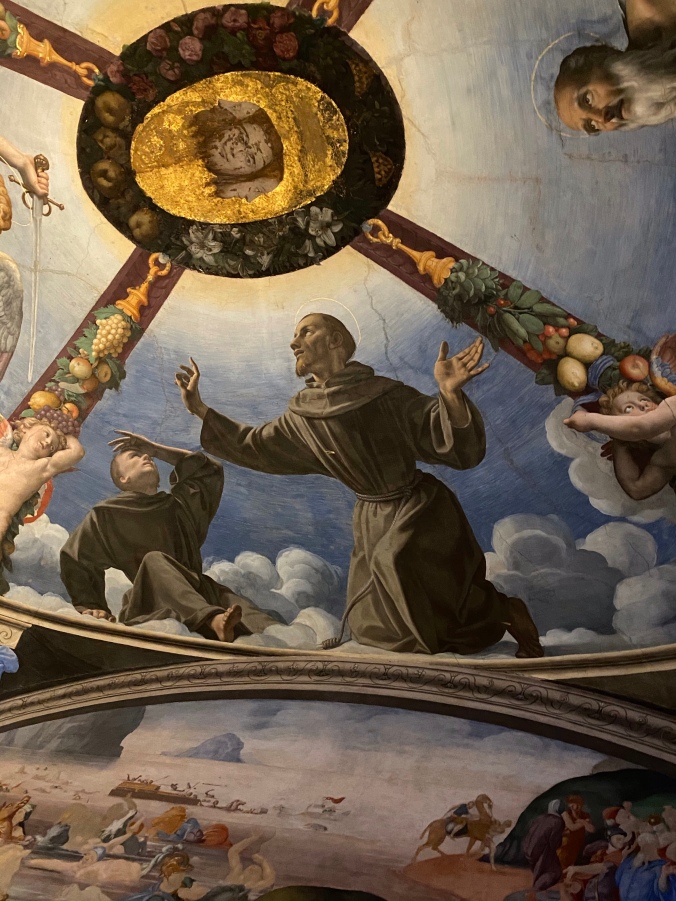