As I sit in Denver on a very cold February morning, my mind wanders back to Tuscany and warm weather.  I’m almost always behind in my posts and so I take this moment to post about Villa Demidoff.

In 1568, Francesco I de’ Medici, Grand Duke of Tuscany, purchased a great estate in the hills outside of Florence and commissioned the famous architect, Buontalenti, to build a splendid villa as a residence for Bianca Cappello.  Bianca was the Grand Duke’s Venetian mistress.  The villa was built between 1569 and 1581, set inside a forest of fir trees. 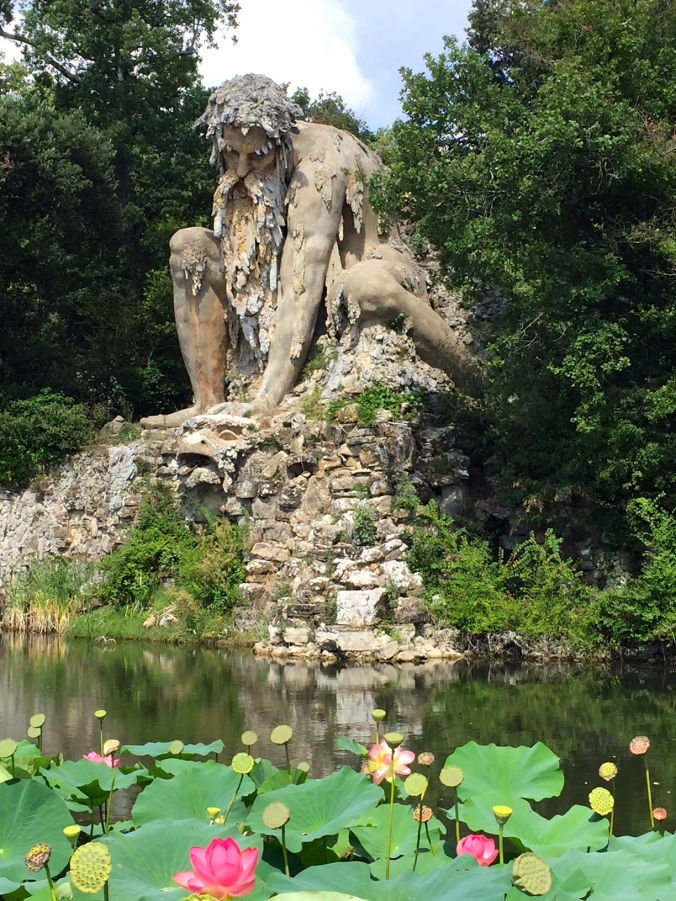 While very little of Buontalenti’s villa survives, at least we still have this fabulous and very large statue of Il Gigante, set facing a pond filled with water lilies.

The lilies are absolutely gorgeous in late August. I had never seen anything as magnificent as the first time I saw this lake of waterlilies in bloom!  And, the statue ain’t bad either. 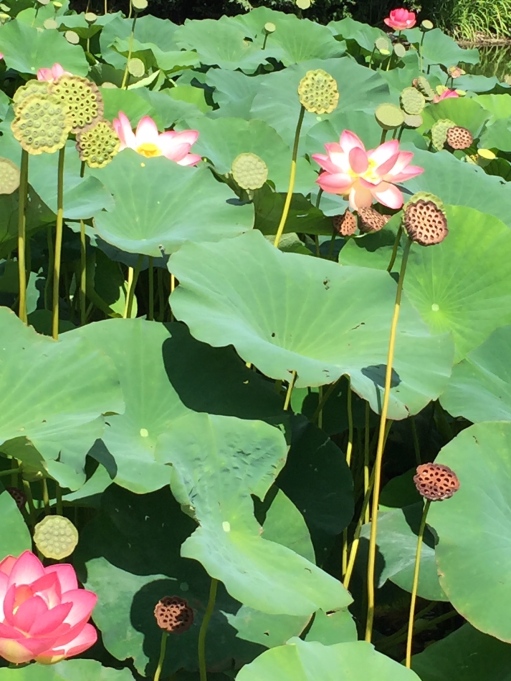 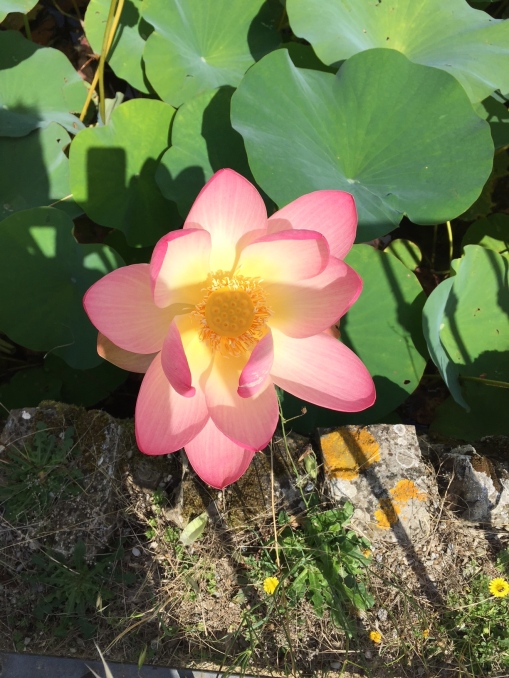 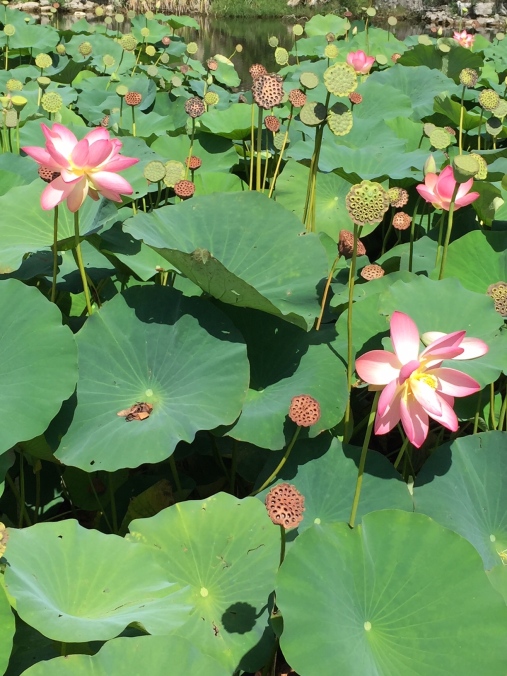 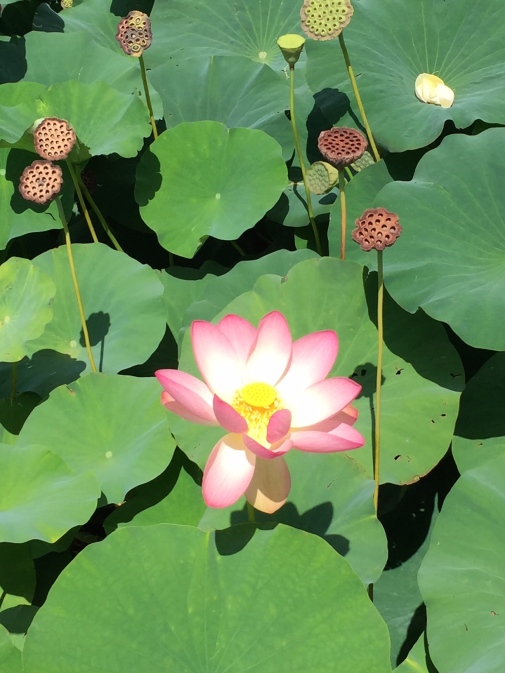 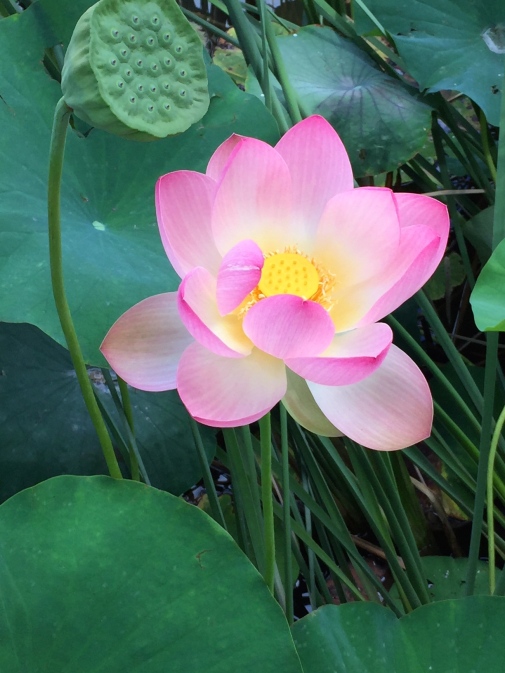 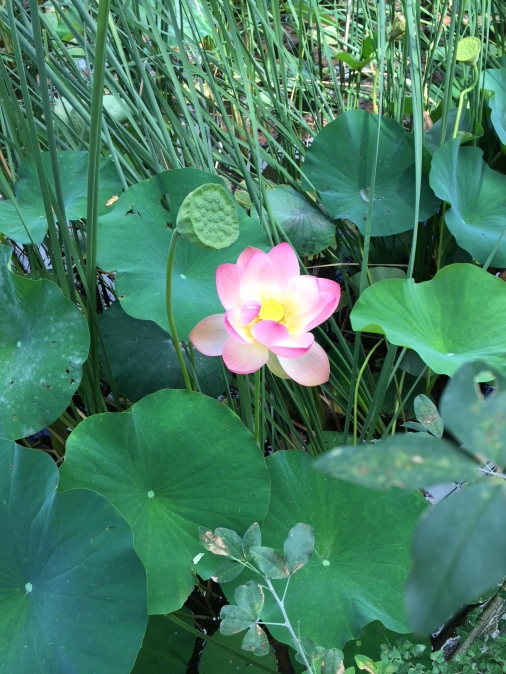 OK, ripping my eyes away from the pink flowers, I walked around towards the back of the statue: 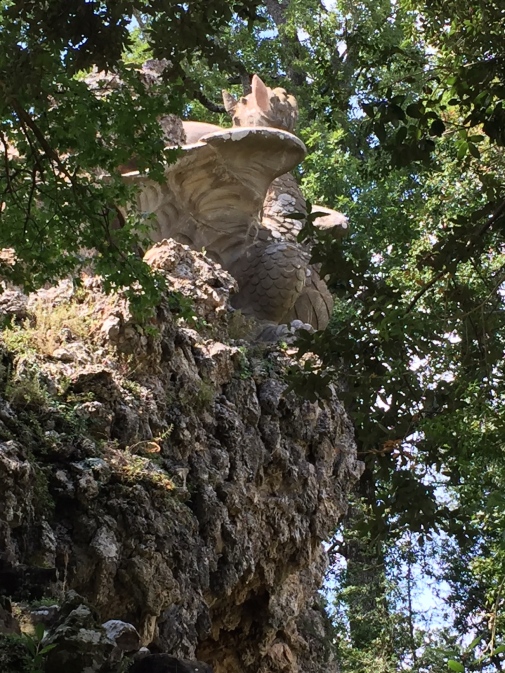 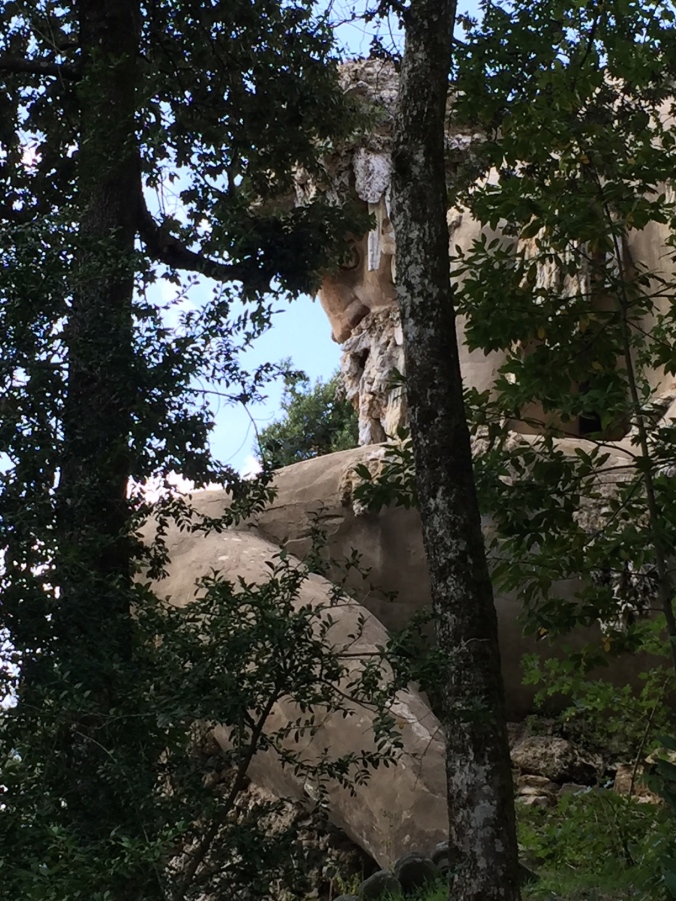 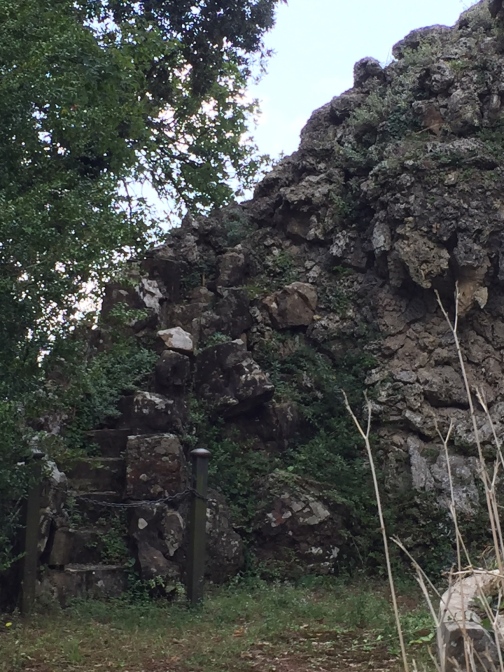 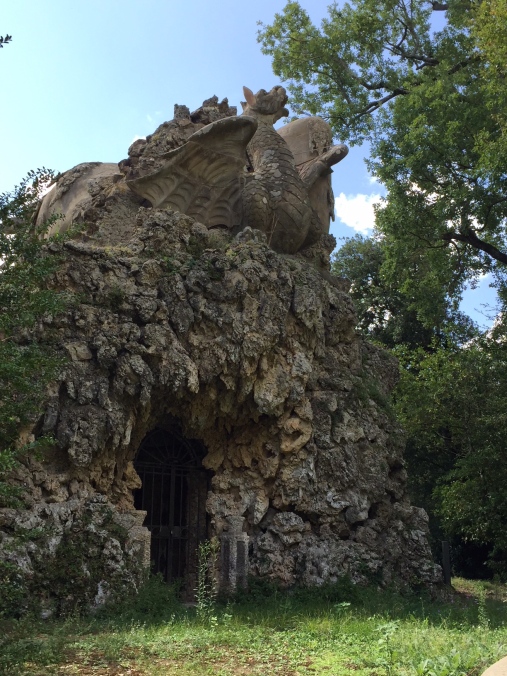 Giambologna was the creator of this amazing sculpture: 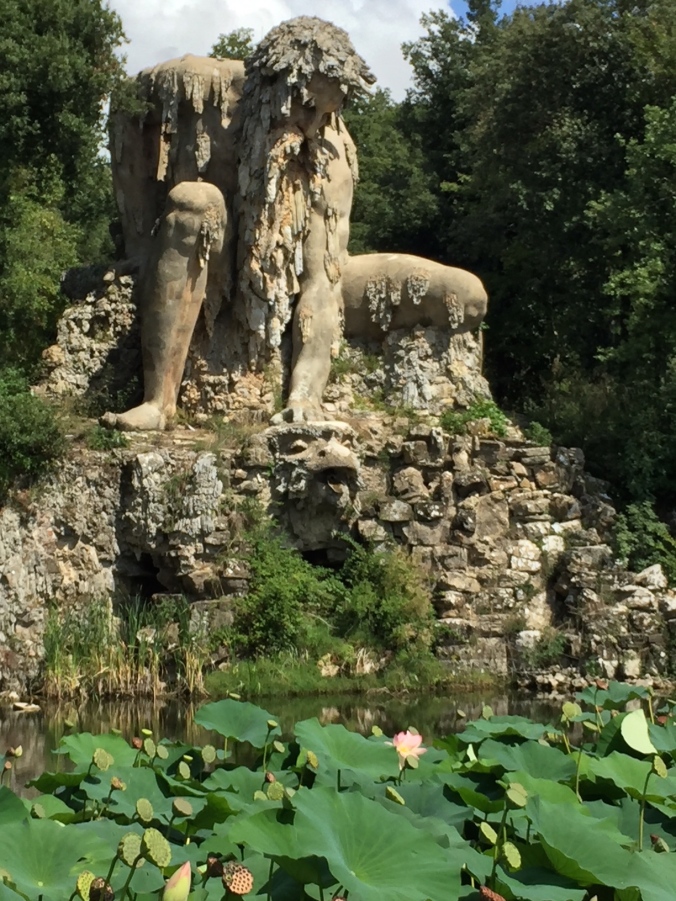 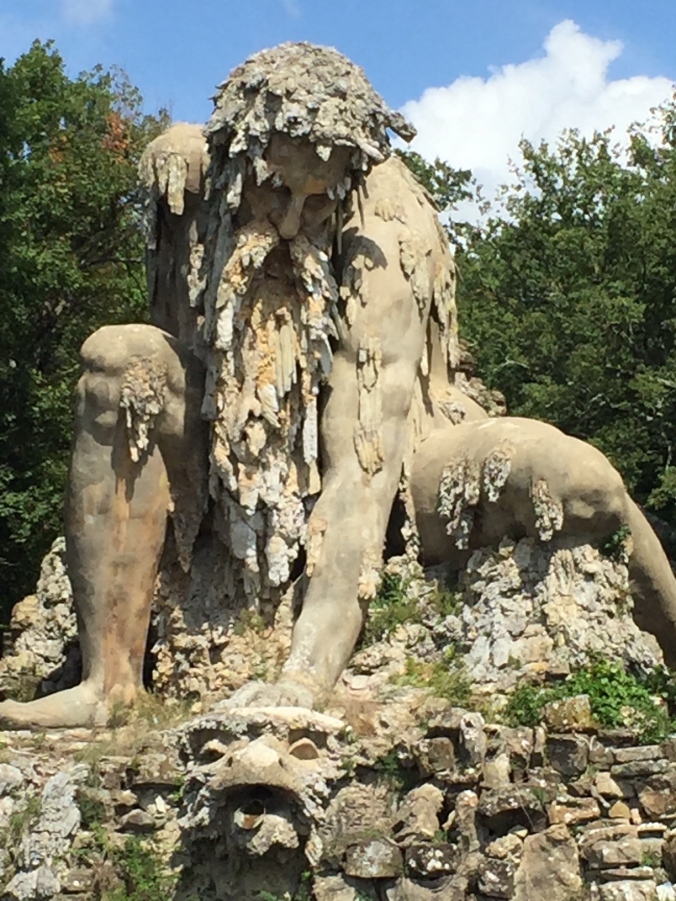 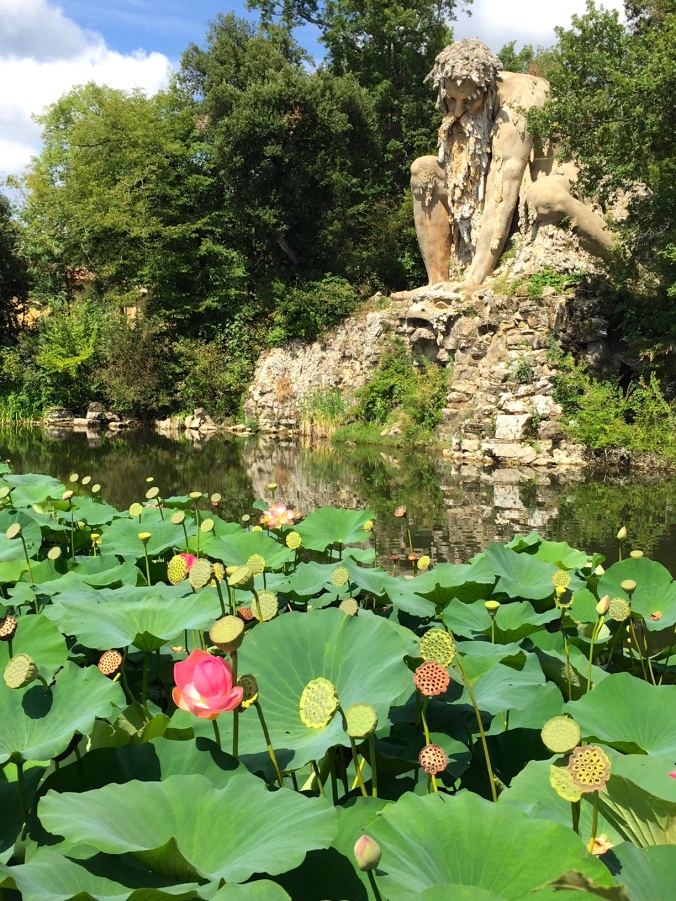 Il Gigante, also known as “the Colossus of the Apennines,” is an astounding work of art. Giambologna designed the lower part as a hexagon-shaped cave from which one can access, through a ladder, to the compartment in the upper part of the body and into the head. The cavity is filled with light that enters from the eye holes in the head.

The exterior of the statue is covered with sponges and limestone pieces, over which water pours into the pool below.

We know that originally, behind the statue, there was the large labyrinth made from laurel bushes. At the front of the giant was a large lawn, adorned with 26 ancient sculptures at the sides.

Later, many of the antique statues were transferred to the Boboli Gardens, and the park became a hunting reserve. As a part of the Pratolino estate, it was abandoned until 1819, when the Grand Duke Ferdinando III of Lorena changed the splendid Italian garden in the English garden, by the Bohemian engineer Joseph Fritsch. The part was increased from 20 to 78 hectares.

The park, which had been owned by Leopoldo II since 1837, was sold upon his death to Paul Demidoff, who redeveloped the property. Demidoff’s last descendant bequeathed the property to Florence’s provincial authorities.

And I feel better already.  I can feel my cold, clenched muscles relax under the spell of the Tuscan sunshine. Soon I will be there again.