If you’ve been to Florence, you know how the hordes of tourists can dampen the spirit of art appreciation.  Think of the Uffizi and you know what I mean.

But, there are several places in Florence where you can view Renaissance art up close and personal and rarely have another soul in the room with you.

One of the most amazing of these places is housed within this entrance: 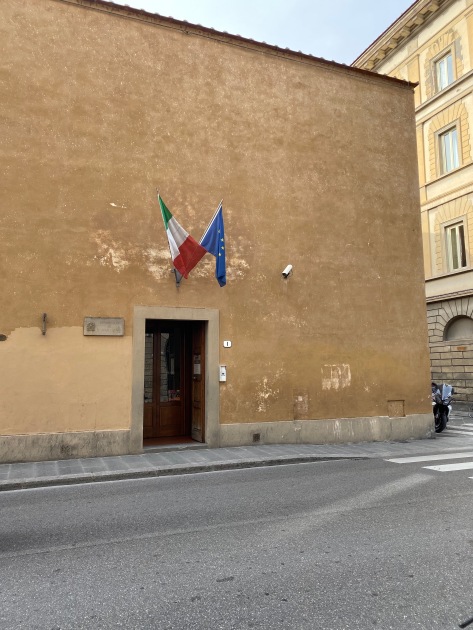 I mean, really, would you even know there was anything at all inside, let alone a masterpiece?

There are no lines at this former convent and no crowds. Few people even know to ring the bell at the nondescript door. What they’re missing is an entire wall covered with the vibrant colors of Andrea del Castagno‘s masterful Last Supper (c. 1450).

The end wall of the large refectory was decorated with frescoes, although these were never known to the outside world since the nuns were strictly cloistered. It was only with the suppression of the convent in 1860 that the existence of this masterful fresco of the Last Supper was revealed. Interestingly, it was initially attributed to Paolo Uccello, but then finally to the true painter, Andrea del Castagno (1421-1457).

Castagno created a richly colored composition, filled with interesting details. For one, the deeply colored “marble” panels fill the middle-ground register and the depiction of black and white ceiling tiles follow a strict linear perspective system.  The long white tablecloth  sets off only one figure: the darkly hued figure of Judas the Betrayer, whose face is painted to resemble a satyr, an ancient symbol of evil.

Another three frescoes were discovered above this one in the 1950s. Three scenes are represented: the Resurrection, the Crucifixion, and the Entombment of Christ. At the time of the restoration in 1952, the three frescoes were removed to be preserved, thus revealing the splendid sinopie that were painted over.

So, here’s the single sign that tells the observant visitor that something wonderful is kept within this sober facade. 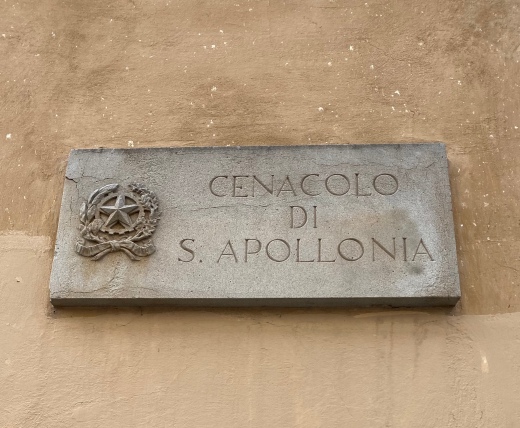 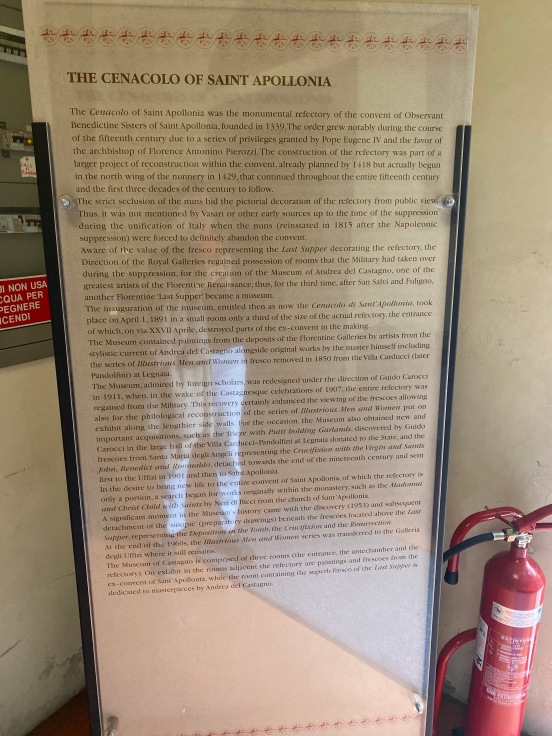 Here is the experience of the refectory: 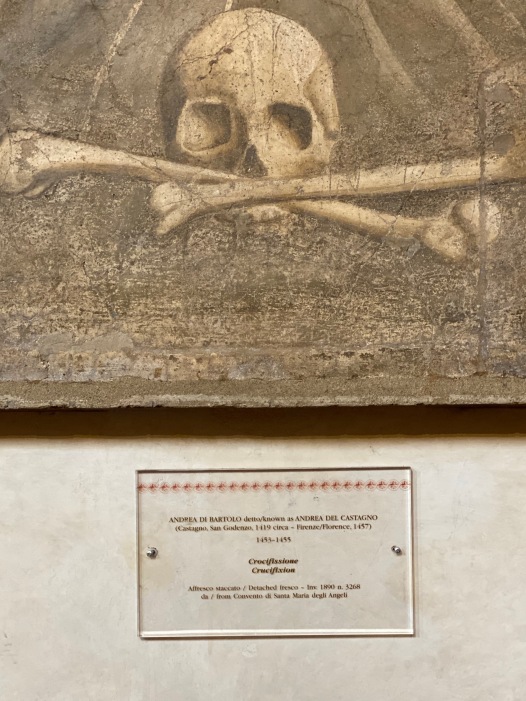 Some introductory information about the artist: 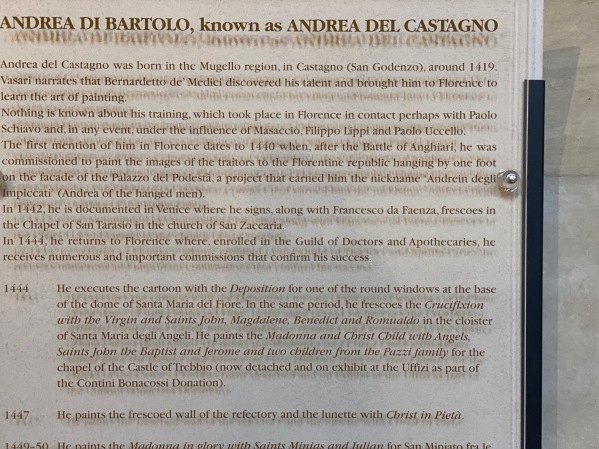 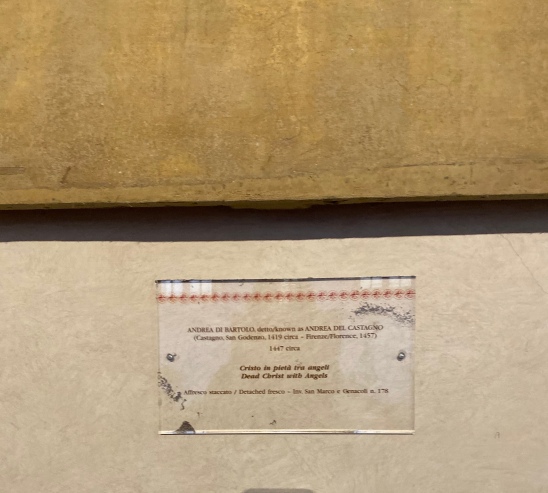 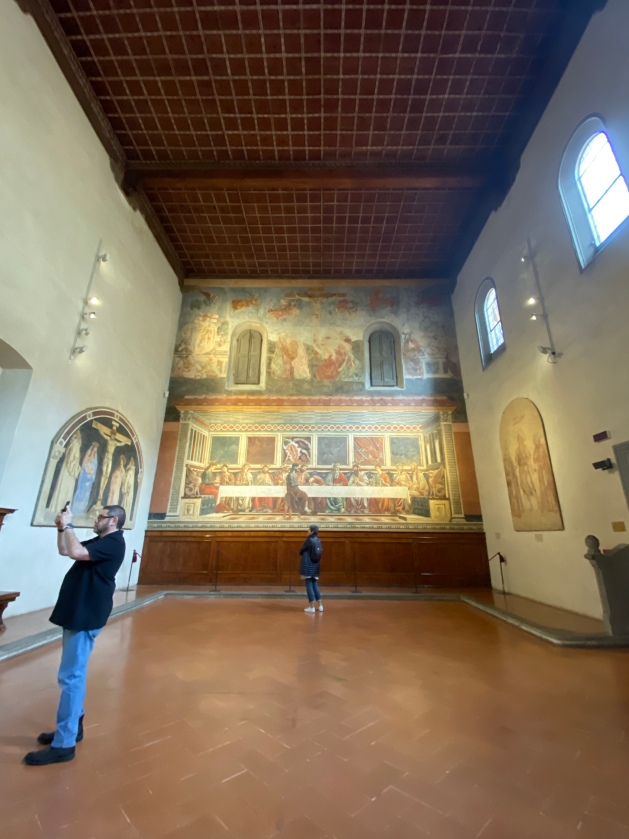 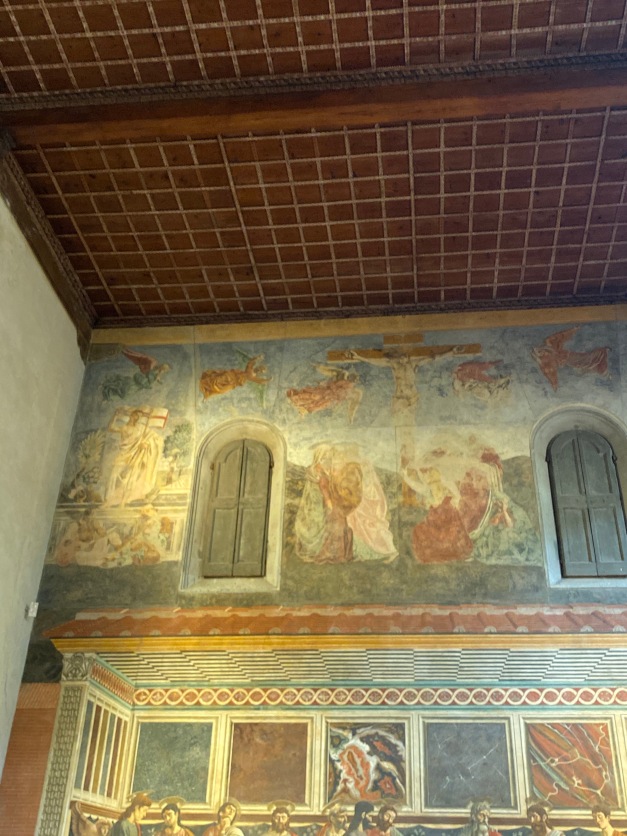 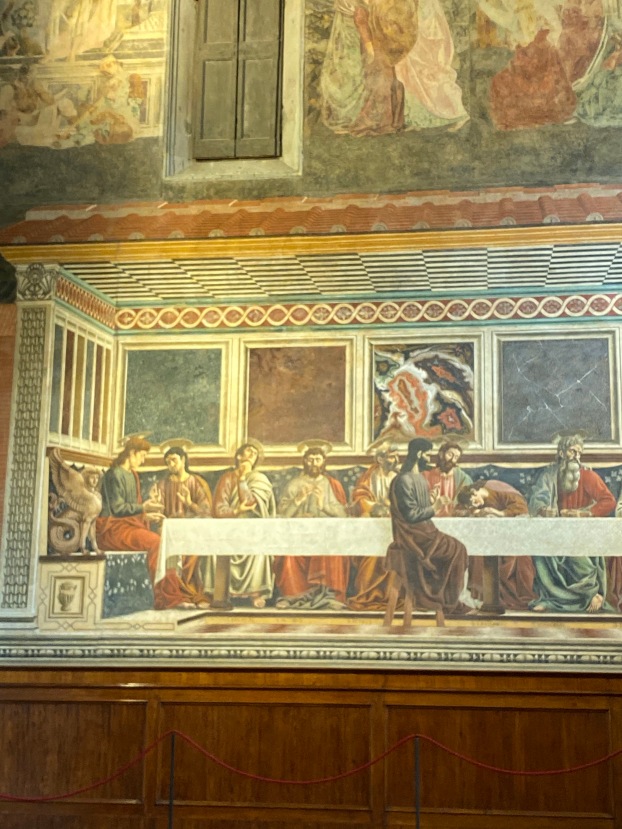 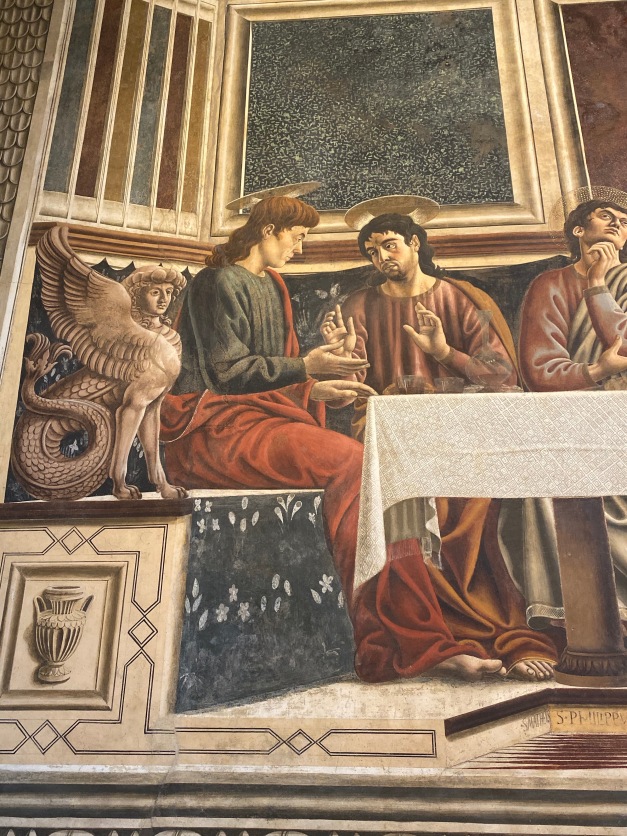 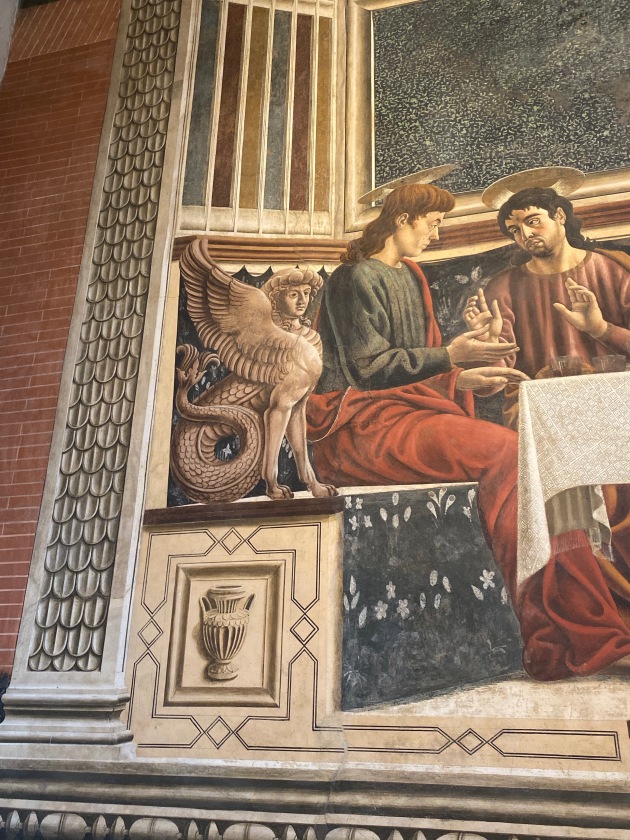 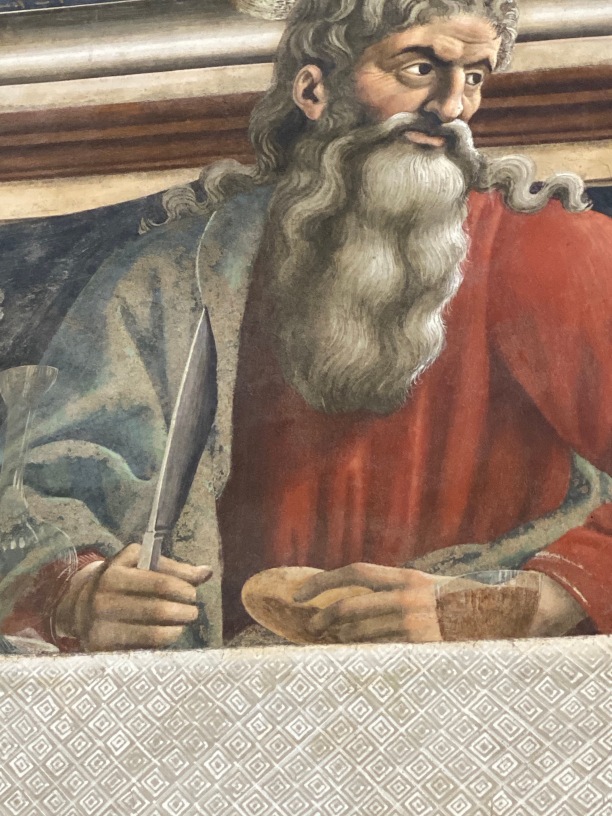 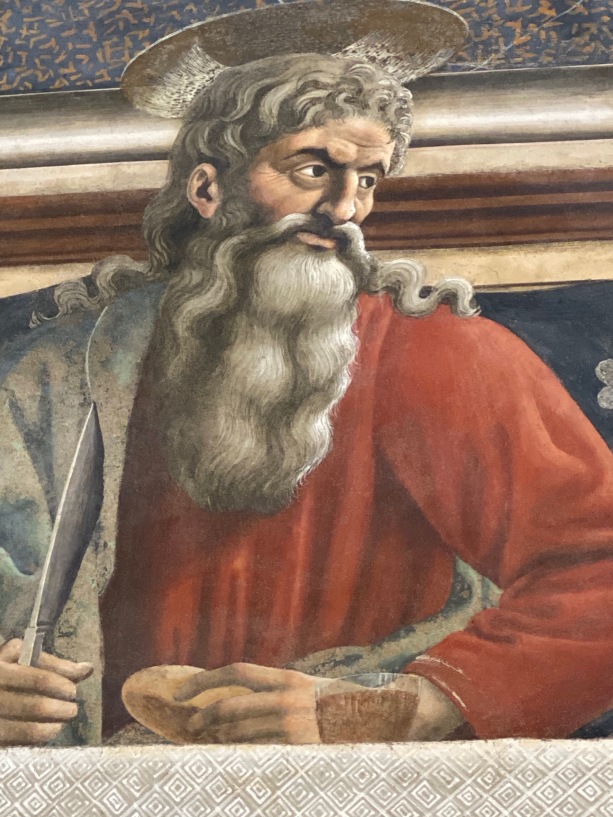 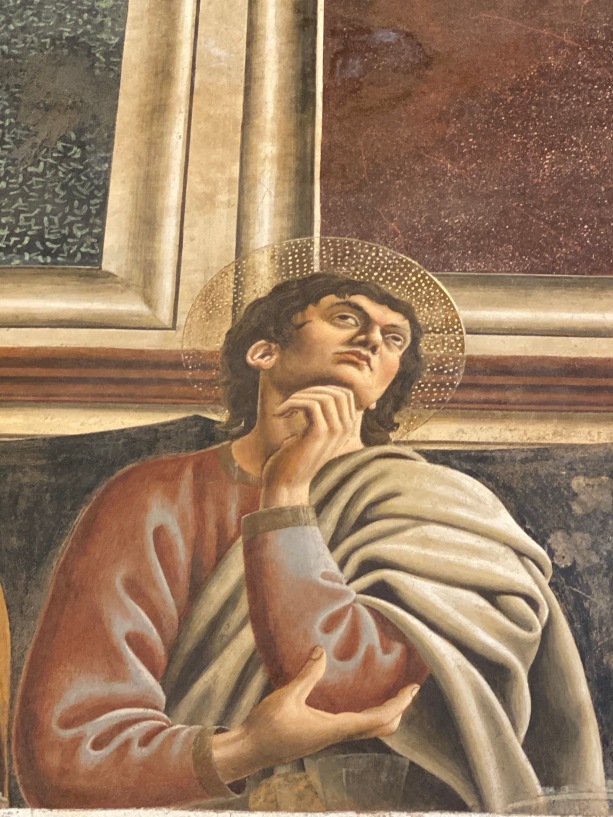