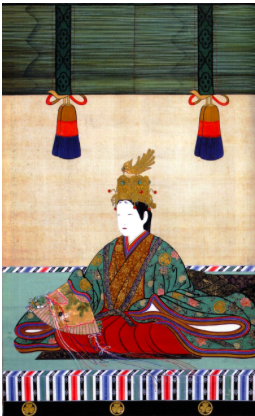 Following more than a century of civil war in Japan, Empress Tōfukumon’in played a pivotal role in shaping culture and aesthetic tastes in the peaceful Edo period. Tōfukumon’in used her endowment from Tokugawa leadership to rebuild prominent Kyoto temples and collect art by her era’s leading artisans. She dabbled in creative endeavors herself, writing poetry and experimenting with calligraphy, and she was particularly interested in fashion and textiles.

Together with her husband, Gomizunoo, Tōfukumon’in fostered more direct relationships between the imperial family and artisans. The empress collected pottery by famed ceramicist Nonomura Ninsei, paintings by Tosa Mitsunobu, and works by other prominent artists and workshops of the day, like Tawaraya Sōtsatu and the Kano and Tosa schools. Her chambers featured artworks that mingled classical styles with contemporary scenes featuring warrior figures and commoners. 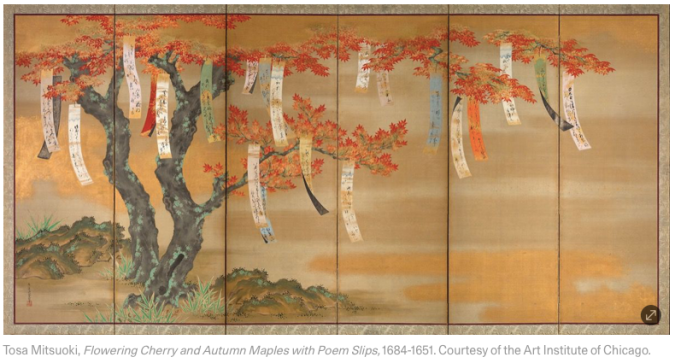 Among her most notable commissions are six painted screens by court painter Tosa Mitsuoki that together comprise Flowering Cherry and Autumn Maples with Poem Slips (1654–81). Against the golden silk backdrop, the artist rendered slips of medieval poetry dangling from finely wrought leaves. The work merges Tōfukumon’in’s interests in literature and painting, and also represents the royal couple’s quest for cultural influence in an era when the feudal shogunate increasingly wrestled control from the imperial family.