Andrea Mantegna (1431–1506) is one of my favorite Renaissance painters. I recently posted on his early frescoes in the church of Sant’Agostino degli Eremitani in Padua. 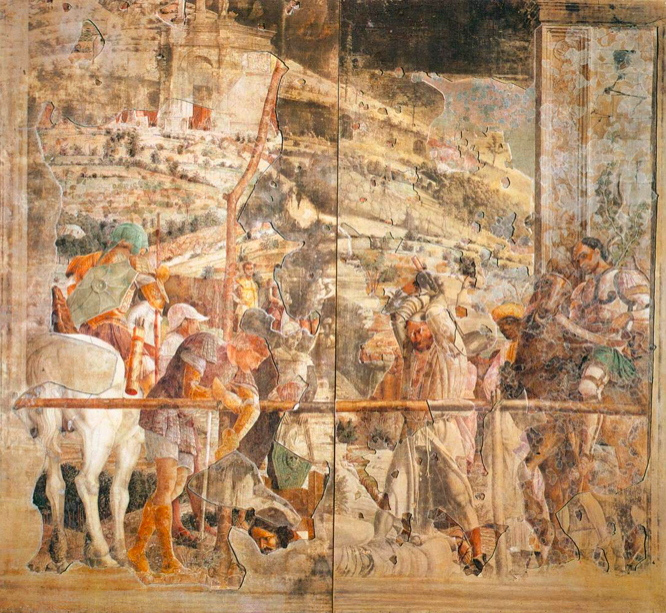 Among the other early Mantegna frescoes are the two saints over the entrance porch of the church of Sant’Antonio in Padua, 1452 (Photos coming: )

As the young artist progressed in his work, he came under the influence of Jacopo Bellini, father of the celebrated painters Giovanni Bellini and Gentile Bellini, and met his daughter, Nicolosia, whom he married in 1453.

Successful and admired though he was in Padova, Mantegna left his native city at an early age, and never returned there; the hostility of Squarcione has been cited as the cause. He spent the rest of his life in Verona, Mantua and Rome; it has not been confirmed that he also stayed in Venice and Florence.

By the late 1450s, the Marquis Ludovico III Gonzaga of Mantua pressured Mantegna to come paint for him; in 1460, Mantegna finally agreed and was appointed court artist. He resided at first from time to time at Goito, but, from December 1466 onwards, he moved with his family to Mantua. His engagement was for a salary of 75 lire a month, a sum so large for that period as to mark conspicuously the high regard in which his art was held. He was the first painter of any eminence to be based in Mantua.

His Mantuan masterpiece was painted for the royal court of Mantua, in the apartment of the castle of the city. 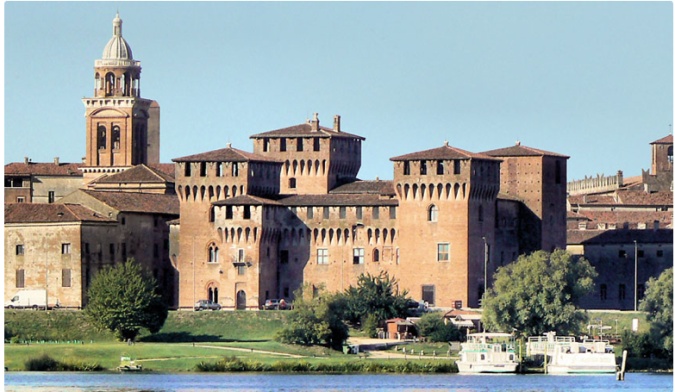 The fresco cycle that he painted in a room in that castle, today known as Camera degli Sposi (Wedding Chamber) of Palazzo Ducale is a masterpiece by any reckoning. I wrote about it here. It includes portraits of key figures of the Gonzaga family and some genii and others. We believe that the Chamber’s decoration was finished in 1474.

Here’s a great video on the paintings:

The ten years that followed were not happy ones for Mantegna and Mantua:  his son Bernardino died, as did his patron, the Marchese Ludovico. The art commissions stopped flowing. Only with the election of Francesco II of the House of Gonzaga did artistic commissions in Mantua recommence.

Mantegna, was dubbed a knight and built a stately home for his family in the area of the church of San Sebastiano. He adorned it with many paintings. The house can still be seen today, although the pictures no longer survive.

In this period, he began to collect some ancient Roman busts (which were given to Lorenzo de Medici when the Florentine leader visited Mantua in 1483), painted some architectonic and decorative fragments, and finished the intense St. Sebastian now in the Louvre.

In 1488, Mantegna was called by Pope Innocent VIII to paint frescoes in a chapel Belvedere in the Vatican. Unfortunately, this series of frescoes, including a noted Baptism of Christ, was later destroyed by Pius VI in 1780. Pope Innocent treated Mantegna with less liberality than he had been used to at the Mantuan court; but all things considered their connection, which ceased in 1500, was not unsatisfactory to either party.

In Rome, Mantegna also met the famous Turkish hostage Jem and carefully studied Rome’s ancient monuments, but his impression of the city was a disappointing one overall. He returned to Mantua in 1490, he embraced again his more literary vision of antiquity, and entered in strong connection with the new Marchesa, the cultured and intelligent Isabella d’Este.

In what was now his adopted city, he went on with the nine tempera pictures of the Triumphs of Caesar, which he had probably begun before his leaving for Rome, and  finished around 1492. These superbly invented and designed compositions are gorgeous with the splendor of their subject matter, and with the classical learning and enthusiasm of one of the masters of the age.  They depict a triumphal military parade celebrating the victory of Julius Caesar in the Gallic Wars.

They remain the most complete pictorial representation of a Roman triumph ever attempted and together they form the world’s largest metric area of Italian Renaissance paintings outside Italy. Considered Mantegna’s finest work, they were sold in 1628 along with the bulk of the Mantuan art treasures to King Charles I of England. They now form part of the Royal Collection at Hampton Court Palace near London, where they occupy a special gallery, with a new continuous frame intended to capture their original setting, mounted into panelling.  Here is just one of the paintings: 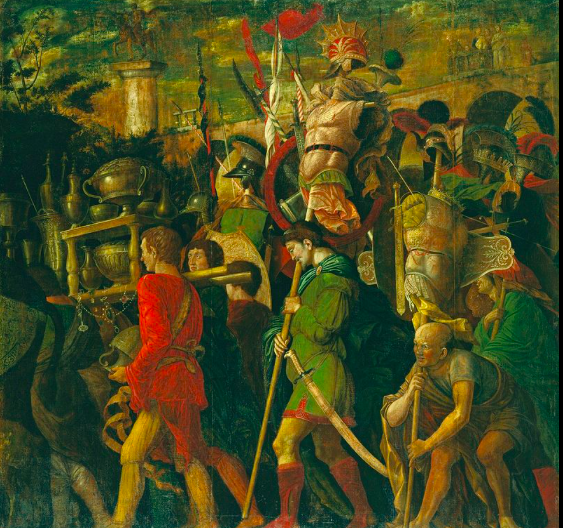 Despite his declining health, Mantegna continued to paint. Other works of this period include the Madonna of the Caves and the famous Lamentation over the Dead Christ, probably painted for his personal funerary chapel. It now hangs in the
Pinacoteca di Brera, Milan. 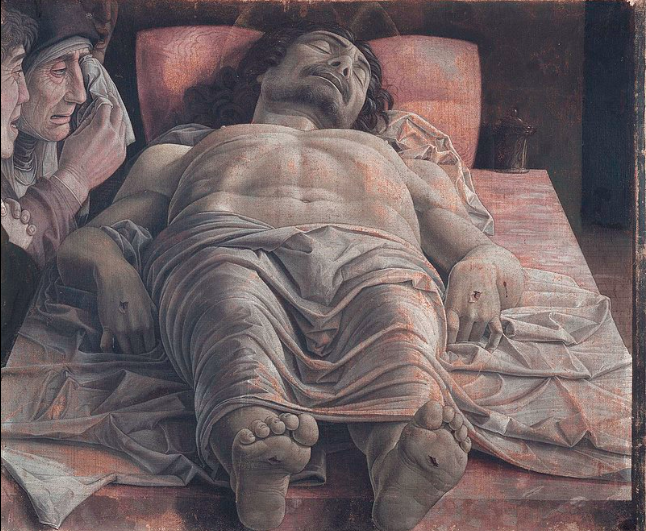 Another work of Mantegna’s later years was what is known as the Madonna della Vittoria, now in the Louvre.

Painted in tempera about 1495, in commemoration of the Battle of Fornovo, whose questionable outcome Francesco Gonzaga was eager to show as an Italian League victory; the Mantuan church which originally housed the picture was built from Mantegna’s own design.

The Madonna is here depicted with various saints, the archangel Michael and St. Maurice holding her mantle, which is extended over the kneeling Francesco Gonzaga, amid a profusion of rich festooning and other accessories. This painting counts among the most obviously beautiful of Mantegna’s works in which the qualities of beauty is less marked than those other excellences more germane to his severe genius, tense energy passing into haggard passion.

After 1497 Mantegna was commissioned by Isabella d’Este to translate the mythological themes written by the court poet Paride Ceresara into paintings for her private apartment (studiolo) in the Palazzo Ducale.

These paintings were dispersed in the following years: one of them, the Legend of the God Comus, was left unfinished by Mantegna and completed by his successor as court painter in Mantua, Lorenzo Costa. The other painters commissioned by Isabella for her studiolo were Perugino and Correggio.

After the death of his wife, Mantegna fathered an illegitimate son, Giovanni Andrea; and, finally, although he continued embarking on various expenses and schemes, he had serious tribulations, such as the banishment from Mantua of his son Francesco, who had incurred the displeasure of the Marchese. The difficult situation of the aged master and connoisseur required the hard necessity of parting with a beloved antique bust of Faustina.

Very soon after this transaction he died in Mantua, on September 13, 1506. In 1516, a handsome monument was set up to him by his sons in the church of Sant’Andrea, where he had painted the altarpiece of the mortuary chapel. The dome is decorated by Correggio.

Giorgio Vasari eulogizes Mantegna, although pointing out his litigious character. He had been fond of his fellow pupils in Padua: and with two of them, Dario da Trevigi and Marco Zoppo, he retained steady friendships. Mantegna developed expensive habits, fell at times into financial difficulties, and had to press his valid claims for payment upon the attention of the Marchese.

In terms of Classical taste, Mantegna distanced all contemporary competition. Though substantially related to the 15th century, his influence on the style and trends of his age was very marked over Italian art generally. Giovanni Bellini, in his earlier works, obviously followed the lead of his brother-in-law, Mantegna. Albrecht Dürer was influenced by his style during his two trips in Italy, reproducing several of his engravings. Leonardo da Vinci took from Mantegna the use of decorations with festoons and fruit.

Mantegna’s main legacy in considered the introduction of spatial illusionism, both in frescoes and in sacra conversazione paintings: his tradition of ceiling decoration was followed for almost three centuries. Starting from the faint cupola of the Camera degli Sposi, Correggio built on the research of his master and collaborator into perspective constructions, producing eventually a masterwork like the dome of Cathedral of Parma.

It is unfortunately impossible to reconstruct the whole of Mantegna’s original intentions there with any confidence, although some panels almost certainly traceable to the chapel still survive. They include three paintings in the Uffizi: The Ascension of Christ, The Circumcision and The Adoration of the Magi. Today they are mounted as a triptych in the Uffizi with The Adoration of the Magi in the centre. They were given this format in 1827, but the inconsistencies in both composition and iconography indicate that these are individual works rather than parts of a uniformly planned altarpiece. Nevertheless, they were created for the same chapel.