What does it take to become a member of the Italian Historical Businesses Union? (the UISI in Italian: Unione Imprese Storiche Italiane)?  This art association was begun in Florence and allows as members only companies that make items of great Italian tradition and excellence and have been owned by the same family for more than 150 years. 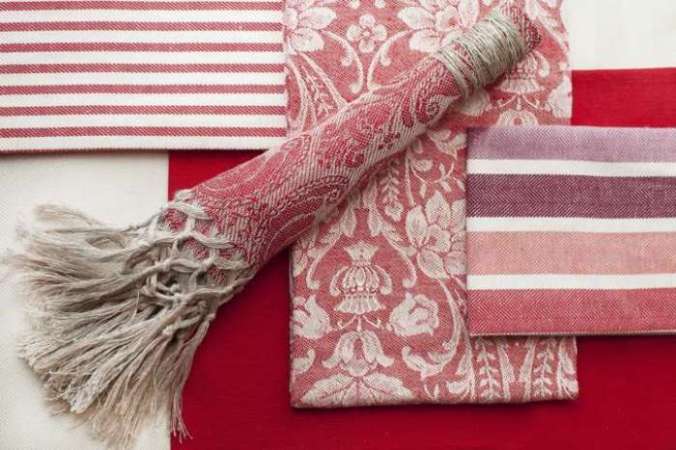 The Busatti company, producers of fine Italian textiles, is a proud member.

I recently visited the Busatti showroom in the Oltrarno section of Florence.  I’d been hunting for some of the beautiful cotton towels known as nido d’api (bee’s nest) in Italian, or waffle weave in English.  This fine company had the towels I was hunting, in a beautiful array of hues.  I chose the color I call “French blue, ” even though these are obviously Italian made! 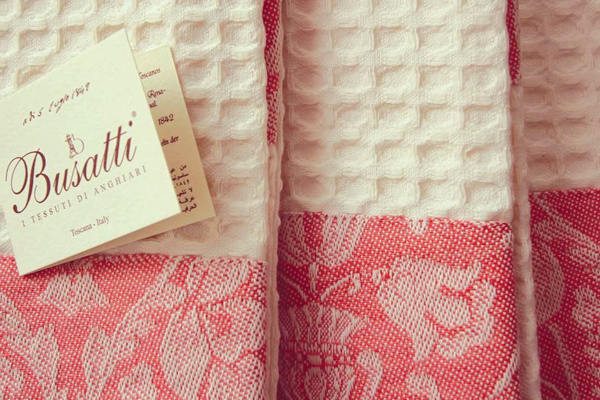 Since 1842 the Busatti family has been weaving textiles in the cellars of the Palazzo Morgalanti in Anghiari, a Tuscan village.  The company can actually trace it’s ancestry further back than that: they had the first machines in Italy that could card wool in the late 18th century. When Napoleon invaded, his troops started producing uniforms for the Grande Armee in Anghiari.  To dye them the blue they wanted, they restarted cultivating a flower known in Italian as guado.  This is “woad” in English, a yellow-flowered European plant of the cabbage family. It was once widely grown, especially in Britain, as a source of blue dye, which was extracted from the leaves after they had been dried, powdered, and fermented.

In 1842 Busatti established itself as a producer of fine cotton textiles, using steam-powered machinery.  In the 1930s, the electric versions of the same looms were first utilized.  It was in the 1930s that the company acquired its current structure and look.

Busatti is still synonymous with quality and tradition, but also of innovation.  They can customize any of their production of tablecloths, draperies and toweling, and can make use of their exclusive embroideries when desired.

The Busatti business can trace its unique history starting with the Grand Duchy of Tuscany (Gran Ducato di Toscana), the contribution to Italian unification with a Garibaldi family member, through 2 World Wars and many economic crises. Fortunately, the company just keeps chugging along in Anghiari. As you wind through wooded hills to visit the ancient, walled town, it seems that nothing has changed there for hundreds of years. The illusion persists in the vaulted 16th-century showrooms of Busatti (www.busatti.com), where linens are still woven on 19th- and early-20th-century looms.

Clients include Miuccia Prada and Valentino, who order made-to-measure table sets in linen and cotton and me, who chooses ready-made, but still gorgeous, towel sets.