When Perugia-born clothing designer Luisa Spagnoli first invented the hazelnut-centred chocolate in 1922, she called it a cazzotto because it resembled a fist. The name didn’t ring right to Giovanni Buitoni, managing director of the Perugina chocolate factory and Spagnoli’s younger lover—Buitoni was 14 years her junior.

The idea of asking a shop assistant for a “punch” just didn’t resonate with the entrepreneur, who was also on the board of directors of the famous pasta brand. Buitoni commissioned futurist artist Federico Seneca to design the packaging and concept, hence the silver wrapping and the tiny slip of paper printed with a quotation about love we still unfurl today.

The box depicting two lovers locked in an embrace was inspired by Venetian Francesco Hayez’s The Kiss (1859), on display in Milan’s Pinacoteca di Brera. All these factors proved a winning recipe; a 1927 advertisement claimed, “In only five years, Perugina has sold 100 million Baci”. 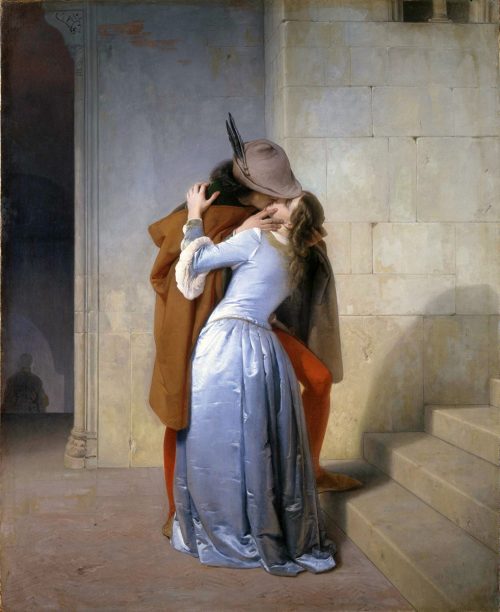 Francesco Hayez’s “The Kiss” (1859)
For Spagnoli and Buitoni, business was never solely about making money (he was also the mayor of Perugia between 1930 and 1934). The pair looked after their employees in a time when corporate social responsibility was practically inexistent: terraced housing and a swimming pool were built near the workplace; dances, football matches and social occasions were regular occurrences; and a nursery was opened at the Fontiveggi factory during the First World War, so that female employees could bring their children to work while the men were away at war.

In 1939, the chocolates set sail to the States, opening a shop to rave reviews in New York’s Fifth Avenue. Luisa Spagnoli did not live to see the overseas success of her chocolates. In 1935, at age 58, the businesswoman passed away in Paris with throat cancer, Buitoni steadfastly by her side.
The enterprise continues to go from strength to strength. In 2018, Baci Perugina were rebranded. Gone are the entwined lovers, replaced with a scattering of gold and white stars topped with a contemporary logo. Limited Edition, Extra Dark 70% and Milk are minor variations on the original dark chocolate recipe. Looking down from the firmament, Luisa Spagnoli and Giovanni Buitoni, who went on marry the opera singer Letizia Cairone two years after Luisa’s death, surely would be proud to see the product of their love sweetly primed for the future.