The Fortezza da basso is a key Florentine monument, but it is almost always overlooked because, let’s face it, it ain’t pretty.  Loving the history of Florence, I jumped at a recent opportunity to tour the inside of the fortress.  I’ll talk about that below.

The fort’s purpose was not to enchant or entertain, as were so many key monuments built from the medieval period moving forward. The fort’s purpose was to protect the city by blocking and intimidating any evil-doers who might be planning to take Florence in a coup of some sort. And this meant both from without and from within the city.

The fort served these functions well, and Florence was never attacked after it was built.   Of course, the fort wasn’t the only reason Florence was left alone.  But the huge benefit of that fact is that the fort is largely intact for us to study and admire.

Today the imposing fort has a much softer, more elegant use; I’ll talk about that later.

In the following picture,  you see one of the fort’s 5 entrances, the Porta Sta. Maria Novella, which is where I entered to begin my guided tour.

The official name is Fortezza di San Giovanni Battista (Saint John the Baptist, who was/is the patron saint of Florence). The more common name, Fortezza da basso, means in English “the fortress from below,” which indicates that the fort has a counterpart higher up.  And, indeed it does: the Forte di Belvedere (fort with a beautiful view) sits high up on a hill to the south of Florence. You can see the location and relationship of both forts here:

The fort is a very impressive military construction with tall, thick and strong walls,  dominated by a gloomy, massive tower. The tower here is not like those that are found on other major Florentine buildings. Towers were usually quite tall, and the fort’s tower is relatively short and squat.

The Fortezza appears like a cyclopic building with powerful bastions bristling with turrets, and full of narrow walkways, parapet walks and secret passages. The massive, extensive walls surrounding the fort are occasionally relieved with projecting stone ashlars, some of which are accented with round discs.

It is theorized that these discs might be a reference to the Medici coat-of-arms, with the 5 balls.

The sophisticated military construction of the fort is a splendid example of the celebrated fortresses built by the Sangallo family. Florence’s Fortezza da Basso was built in record time in 1534, after the return to power in Florence of the Medici family after the dramatic seige of 1529-30.

The Fortezza was designed by Antonio da Sangallo the younger, with the help of Pierfranceco da Viterbo, for Alessandro de’ Medici, the Duke of Florence. And, while it might not be the most beautiful structure in Florence, it is the largest historical monument in the city.

The Fortress, which was inserted into the 14th-century walls of Florence, was built under the growing threat of turbulent political upheavals. It was one of the very first Italian “citadels” and seems rather to have been built as a protection against the city’s inhabitants than from its external enemies. 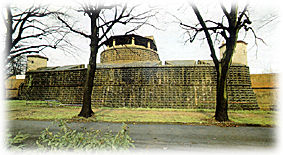 View of the bastions of the Fortezza da Basso

Here are some of my pictures from within the walls of the fortress and leading up to the watch tower on the south side of the former military base:

Below are the stairs that lead up to the watch tower:

The next 3 pictures are taken from inside the tower:

And here are the views of Florence as seen from inside the watch tower:

Once again, I was struck by just how small the city really is.  It is so obvious from way up high (not that this tower is that tall); the domes of San Lorenzo and the Duomo seem just a stone’s throw away.

The guided tour of the tower was an incredible treat, but perhaps even more amazing was the fact that we also got to go under the fortifications of the south wall.  This Florentine fortress has its secrets and its curiosities. The most important ‘mystery’, yet to be verified and fully discovered, is a gallery which allegedly runs along the perimeter.  There is also the tunnel in a state of partial abandonment, which was used by defenders to counter enemy attacks. Legend has it that there is a secret passage from the gallery of Fortezza da Basso that crosses the city underground and leads to the Forte di Belvedere. Who knows, but I find that idea to be ludicrous.

As a part of my guided tour, we got to visit the tunnels below.  This is an amazing fact; almost no one in the general public has seen this area. Here are my photos from our tour down below:

The next 2 pix are looking up from the tunnel to light shafts:

Another interesting curiosity about the fortress has to do with the later Grand Duke, Pietro Leopoldo, who knew about the American scientist, Benjamin Franklin, and his  theories. This duke and Franklin were contemporaries. Franklin’s studies made a huge contribution to the study of meteorology and electricity, and his invention of the lightning rod was noted by the duke. Not surprisingly, the Grand Duke wanted to protect his buildings in Europe, and in particular those with major stores of gunpowder. So he used Franklin’s recommendations and installed lightening rods.

Since 1967, Fortezza da Basso has been used as an exhibition center and, as such, it hosts a large number of Florence trade shows and conferences. The former military base is spread out over about 100,000 square meters, and about half of them are covered.

Nowadays the Fortress is used for all of the most important Florentine exhibitions and fairs (from Pitti Immagine to the International Exchange of Congress Tourism, Florence Gift Mart to Eurocamper, the International Exhibition of Crafts to Prato Expo, etc.).
Built on three floors, the modern pavilion that is usually used for these events was designed by architect Pierluigi Spadolini and inaugurated in 1977. Standing in the center of the great square inside the Fortress, the Pavilion is surrounded by ancient buildings that are gradually being restored: the Theatrino Lorenese, the Palazzo delle Nazioni, the Arsenal. Also, ever since the 1966 flood, the large buildings on the southern side have hosted the restoration Laboratories of the Opificio delle Pietre Dure.