In the historic center of Florence, a street is never, ever, merely a street.  Here a street carries history, a record of events, and was, more than likely, also the home to some important person(s) from the past.

The Via Ricasoli in Florence is short, and runs between the Piazza del Duomo to Piazza San Marco. It’s a short street, but a critical one, connecting, as it does, two very important religious centers.  It’s prime property, no matter how you describe it. As we say in the USA, “location, location, location.” 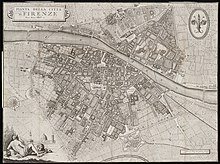 Plan of the city of Florence in 1847, here it is called via del Cocomero

The via is one of a series of streets that were laid out by Arnolfo di Cambio (c. 1240 – 1310) in the early 14th century, when Firenze was encircled with a new set of walls, to encompass its ever expanding urban development.  This series of streets run more or less perpendicular to the Arno River, which was always a “north star” (more correctly it was a south star)  for the city’s planners.  Via Cavour, Via dei Servi, and others were among the contributions by the city planners.

The via takes its present name from the Ricasoli family.  They owned the most important palazzo on the street, in Piazza Goldini.  The palazzo of Ricasoli sits here.  Bettino Ricasoli was an important 19th-century Florentine politician.

But, at least until 1847, the street was called Via del Cocomero (street of the watermelon; I can only guess there was once a mercato here).  And, the ancient Teatro Niccolini, located at the beginning of the street headed to the Piazza del Duomo, was originally called il Teatro del Cocomero.

At the intersection of Via Ricasoli and the Via dei Pucci is the Tabernacle of the Five Lamps, one of the most showy architectural features of its kind in Florence (for great info on Florence’s tabernacles, see http://www.theflorentine.net/art-culture/2006/10/unforgettable-places-and-special-works-of-art-2/). At Via Ricasoli 30, a plaque commemorates the architect Pasquale Puccianti, who died here in 1858.  Another signs recalls the residence here of a railway engineer and senator, Giovanni Morandini.

Further north on Via Ricasoli stands the rear of the modern Teatro della Compagnia.  At Via Ricasoli 40-42 stands the Palazzo Gerini, which fused two earlier noble palaces, one by Bernardo Buontalenti and the other by Gherardo Silvani.

At the intersection of Via Ricasoli with Via degli Alfani, a sort of small square (piazza) is formed, on which the Luigi Cherubini Conservatory stands today.  Further north of the intersection is a spot which always seems to be swarmed with visitors.  That’s because the entrance to the Accademia Gallery is located here, in a building that was formerly the hospital of San Matteo.

The hazy photo above was taken on Via Ricasoli around 1935.  It looks just about the same today, except for the clothing worn. The stylish donna is headed south on Via Ricasoli, towards il Duomo.

Oh, the history this street has seen. Difficult, but intriguing, to imagine.

addendum: just ran into some further info on this street of watermelon:

In the Darkest Ages of Florence, fruit orchards stretched out behind the city walls and over via Ricasoli. In medieval days this thoroughfare was called via del Cocomero, the “Street of the Watermelon.”

It was also the address of the thirteenth-century painter Cimabue and his apprentice Giotto, who took over his master’s house and studio when he died in 1302.

As Florence changed from a provincial river town into a medieval urban commercial center, this street and those around it were plowed up and transformed into artisans’ workshops.

The streets closest to the Duomo resounded with the sounds of hammering and tapping and hissing of forges and bellows. Via Ricasoli was also the casket-making center of the town. A block north of here, at the intersection with via de’ Pucci, were the workrooms of the tinkers and coppersmiths.

One thought on “Via Ricasoli, Firenze (aka watermelon street)”