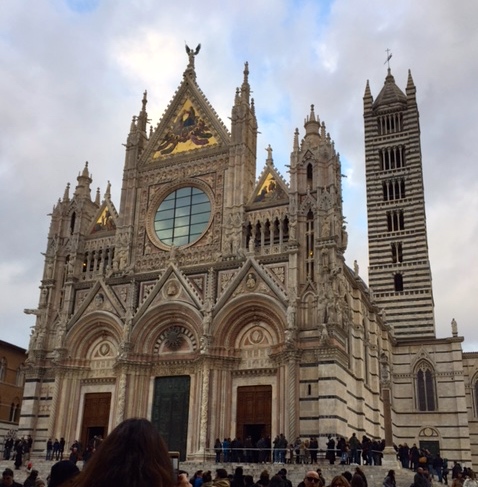 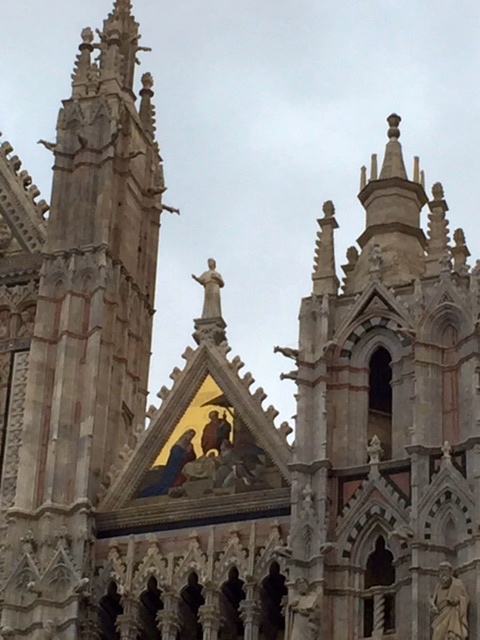 Siena still seems one of the blessed places of the Earth, a town whose beauty alone might justify the claim inscribed on the Camollia Gate:  – ‘Siena opens her heart wide to you’. From the shell-shaped Piazza del Campo, the three terzi (districts) spread along the town’s three curving ridges, their harmonious buildings constructed in the bricks of that warm hue known to artists as ‘burnt sienna’. In the prosperous years before the Black Death, ‘the city of the Virgin’, as it was called, had a population of over 50,000 in addition to another 50,000 in its contado, the country districts and small towns it controlled to its south and west. By the time of Lorenzetti’s frescoes, Siena had added Grosseto and Massa Marittima to its domains.

By the 1330s Florence had twice as many inhabitants as Siena, yet it was at this time that the smaller city, already possessor of the striking zebra-striped cathedral we see today, decided to erect the largest church in Christendom. The project was halted by the Black Death, which killed half the town’s population, and was abandoned soon afterwards, but some of its pillars and arches still stand as testament to monumental ambition. The existing cathedral, which is pretty large itself, would have become merely the transept of the greater glory. Siena’s rulers, whom their subjects might